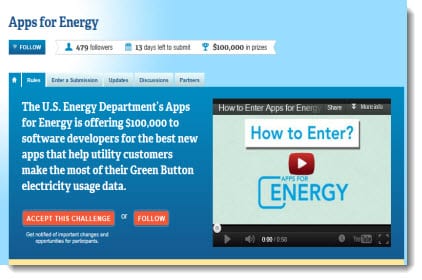 Cleanweb gaining momentum in the U.S.

Cleanweb is an aspect of sustainability and environmentalism that is focused on the use of social media, mobile technologies, and the Internet as methods of addressing resource issues and energy efficiency. Earlier this year, the Obama administration launched the Green Button initiative, which allows Americans to track their energy consumption. The Green Button is the most apparent example of the Cleanweb in the U.S. The DOE believes that its new competition will help to further progress the Cleanweb and bring alternative energy to the forefronts of people’s minds.

Developers encouraged to participate in competition

App developers are being invited to participate in the competition and create innovative, energy-focused software. The applications are meant to be available to a wide audience of technology users and are not intended to be restricted to use on mobile devices. The DOE hopes to find applications that combine public data with the capabilities of the Green Button. Apps that provide users with ways to save money on energy are expected to fare well in the competition. The DOE is hoping that the availability of these mobile applications will help make alternative energy and efficiency a more popular issue, especially amongst a tech-savvy generation.

Cash prizes at stake for professional and student developers

Participants have a chance to win $100,000. The developer responsible for the best overall application will also receive an additional $30,000. Students are encouraged to participate in the event as well. Applications will be judged by Department of Energy officials, utilities and industrial executives, technology professionals, and alternative energy experts.

More information on the competition can be http://appsforenergy.challenge.gov/