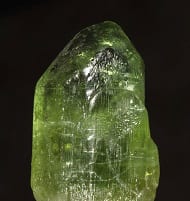 Researchers from France’s University of Lyon have discovered a new way to produce hydrogen fuel that may make fuel cells much more viable for transportation. Hydrogen production is often the target of criticism from those that believe that fuel cells have no place in clean transportation. Current hydrogen production methods are both expensive and somewhat inefficient, making fuel cells relatively unpopular among consumers in general despite the amount of support this technology has received from the auto industry as a whole.

Process based on the use of Peridot

A team of researchers have discovered that the semi-precious gemstone Peridot can be used to produce hydrogen fuel by mimicking a natural process. Researchers have found that they can use this material to strip one oxygen molecule and one hydrogen molecule from water, producing a mineral known as serpentine. This process also produces more hydrogen molecules, which can easily be collected and used to power fuel cells. This process typically occurs naturally over long periods of time, but researchers have found that it can be sped up through the use of aluminum oxide.

Hydrogen fuel production has been a problematic issue for some time. This issue has garnered more attention as the auto industry has grown more serious about fuel cells. Most major automakers have plans to launch hydrogen-powered vehicles around the world beginning in 2015, but in order for these vehicles to find success they must be supported by a working hydrogen infrastructure. In order for an infrastructure to take form, efficient hydrogen production methods must be developed.

Researchers from the University of Lyon believe that their discovery could pave the way to efficient hydrogen production. The research team is not the only party seeking to solve the problems associated with hydrogen production, of course. Several other research groups have also found similar ways to speed up production and make current production methods more convenient.