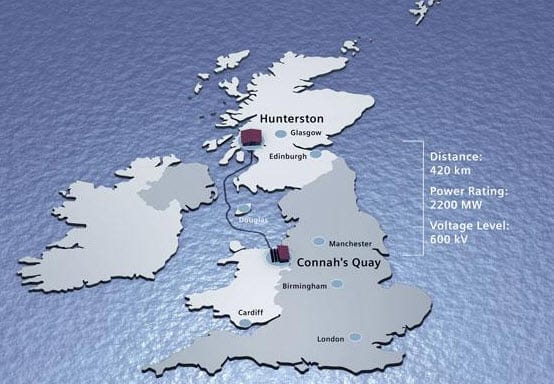 As politicians squabble over the potential of Scotland breaking away from the United Kingdom, the English government is working to build a new submarine energy project that will connect the two countries for years to come.

The project is called the Western HVDC Link. It will be the world’s most expensive and one of its first submarine high voltage direct current links between two countries. The link will be established between the cities of Glasgow and Wirral and will be submerged in the Irish Sea.

The connection will be responsible for transmitting a total of 2,200 megawatts of electricity. The connection could be up and running by 2016, at which point it will be funneling at least 600 kilovolts of electricity every day. The project will help support the emerging alternative energy projects in both countries.

Once these projects take root, they will supply the submarine grid with electricity, making it easier to transport energy to both Scotland and England.

The topic of Scotland’s independence is becoming a very serious issue. The Scottish government is determined to continue working with the English government even if it does separate from the Union, but Scotland will no longer be subject to the whims of the United Kingdom and its legislations. Despite the possibilities, the alternative energy projects established by both countries are expected to continue without any major delays.