Solar energy beats natural gas in the US in 2015

Last year, more solar energy systems were installed in the United States than natural gas power plants, according to a new report from the Solar Energy Industry Association and GTM Research. This marks the first time that solar power surpassed natural gas in terms of new installed capacity. The report shows that solar accounted for 29.5% of all new energy sources built in the country in 2015, showing that the solar sector continues to thrive throughout the country.

7.29 GW of solar capacity was installed throughout the US in 2015

Last year, the U.S. established a new record in installed solar capacity. The report shows that some 7.29 gigawatts of solar capacity was installed throughout the country in 2015, which is 17% more than what had been installed in 2014. The solar sector has benefitted from considerable support from the federal government as well as the private sector. Several states have been focusing more heavily on solar power in the hopes of becoming more environmentally friendly and distancing themselves from fossil-fuels. 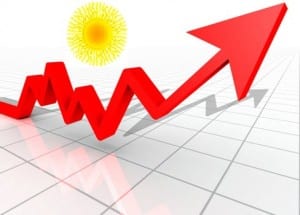 The United States now has a total of 25 gigawatts of installed solar capacity, which is enough to power approximately 4 million average homes. Solar power has become particularly attractive to homeowners, many of whom are taking advantage of new services that allow them to install solar panels on their properties. In 2014, the U.S. residential solar market grew by 66%, with many homeowners opting to use solar power as an alternative to conventional forms of electrical power.

While the solar sector is growing quickly, it still accounts for a small part of the overall energy infrastructure in the U.S. Other forms of clean energy have also outpaced solar in terms of growth. Wind power grow significantly in 2015, surpassing the 8 gigawatt of newly installed capacity. Solar power is likely to see accelerated growth in the coming years, especially as support from the government increases.