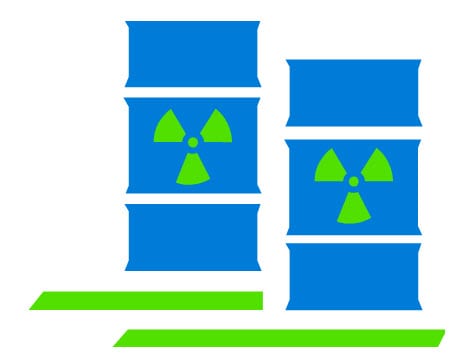 The waste generated by nuclear power plants cannot be disposed of and is usually contained in steel drums and buried underground or held in secure facilities. In the wake of the Fukushima nuclear crisis in Japan, which was sparked by a powerful earthquake last year, many nations around the world have begun abandoning nuclear energy, but are unable to cut ties with nuclear waste. In the United Kingdom, the Department of Energy and Climate Change may have found a use for this waste.

Researchers from GE Hitachi, a subsidiary of both General Electric and Hitachi, have developed a new nuclear reactor that transforms nuclear waste into a usable fuel. The reactor consumes depleted plutonium and uranium to produce a fuel that can be used to generate electricity. The core of the reactor is cooled using liquid sodium and the heat it absorbs would be transferred to massive turbines that also produce electricity.

This could be a major boon for countries looking to dispose of their radioactive waste.

Currently, the UK is home to more than 35,000 tons of nuclear waste. GE Hitachi claims that, if enough of these reactors were built, that this waste would be enough to power the entire country for 500 years. The cost of the reactors remains a point of concern, of course, but the only other solution to disposing of the fuel would cost the government billions of dollars.