Missouri rest stop to be home to promising new project

Using a road to harness the power of the sun may seem like science fiction, but a rest stop in Missouri may become the first place in the world to have such a system in operation. The rest stop, which is located along Route 66 in Conway, Missouri, will be home to a new experimental project and is one of several similar projects that are expected to be launched within the coming years throughout the world. The project is being developed by Solar Roadways, a startup based in Idaho.

Solar panels will help provide electricity for the rest stop

The rest stop will be equipped with 50 solar panels, all of which will be affixed with durable glass, allowing them to withstand significant wear and tear. Initially, the panels will be installed on sidewalks, but they will eventually make their way to the roadway. Once operational, Solar Roadways predicts that the rest stop’s primary building will be powered by the new solar energy system. The solar panels being used by Solar Roadways have already gone through various stages of testing and they have proven to be both reliable and efficient.

Solar energy may be coming to roadways throughout the US 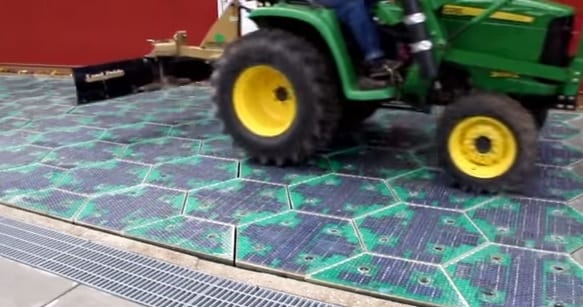 In 2011, Solar Roadways landed a $750,000 contract with the Department of Transportation. The contract involved testing new solar energy solutions, which could be affixed to streets as a way to generate large quantities of electrical power. Solar Roadways also headed a successful crowdfunding campaign through the Indiegogo platform. Through the campaign, the company was able to raise $2.2 million. The company’s latest test project is part of Missouri’s overarching Road2Tomorrow initiative, which aims to make more environmentally friendly and sustainable highways.

If successful, the project may open the way for a new avenue for solar energy. Because roadways are quite plentiful throughout the United States, these tracks of land have significant promise in terms of energy generation. Until very recently, the solar resources available on roadways have gone untapped. Solar Roadways is one company that intends to resolve this issue and may set a new standard in renewable energy generation.