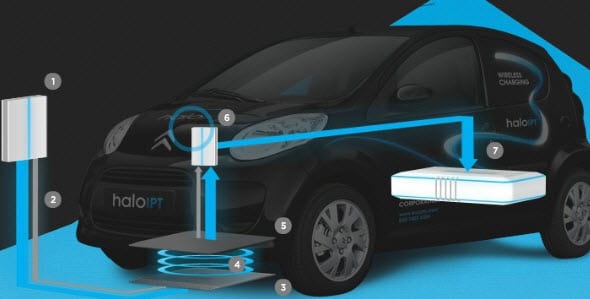 Qualcomm, a leading developer of wireless technology, has been working to promote the concept of wireless energy, especially in the realm of transportation. Electric vehicles are becoming more common as automakers attempt to comply with strict emissions standards coming from some of the world’s governments. These vehicles will likely help automakers comply with the standards, but before they can a comprehensive infrastructure capable of supporting them must first be established. Qualcomm has developed a wireless energy system that could make charging electric vehicles less cumbersome.

Qualcomm’s Wireless Electric Vehicle Charging (WEVC), also called Halo, system is designed to charge electric vehicles without the use of cables. The company believes that this is the next step in making a comprehensive infrastructure for electric vehicles. The wireless energy system produces an electromagnetic field that can transfer electricity between two objects. A driver would park their electric vehicle at a wireless charging station and the car’s battery would recharge without the driver having to exit the vehicle.

The wireless energy system is currently being tested in London. Qualcomm will make use of the system at its offices in West London, where employee vehicles have been equipped with a charging pad that will allow them to interact with the charging stations. Minicab company Addison Lee will also participate in the tests, equipping its electric vehicles with Qualcomm’s pad device as well.

There are concerns as to whether Qualcomm’s wireless energy system is plausible given the current transportation climate. Technology may be at a point where wireless energy is feasible, but whether consumers and automakers will show interest in the concept has yet to be seen. Qualcomm believes that wireless energy is the way of the future, especially in regards to transportation, and will work to promote its new initiative as much as possible.