Biofuel may be produced from roadside weed

Researchers from Nevada think they may be able to produce diesel fuel from gumweed.

Nevada scientists believe that curlycup gumweed, a common roadside weed that grows across much of Nevada’s high desert, may be ideal for producing biofuel. More specifically, the researchers think that they are close to producing diesel fuel and may even one day be able to produce jet fuel from the plant, reported the Associated Press.

Back in the 1980’s, a University of Nevada researcher and mining engineer, Darrell Lemaire, secured a Department of Energy grant for gumweed research, one of the first grants awarded to study the possibility of transforming plants into biofuels. Lemaire approached Glenn Miller, an environmental sciences professor at the University of Nevada, Reno’s (UNR) College of Agriculture, Biotechnology and Natural Resources. He convinced Miller to conduct research in his lab.

For about a decade, the two scientists have been growing gumweed on the UNR campus. Their project grew from the idea that biofuels should not be in competition with food crops in Kansas or Nebraska. 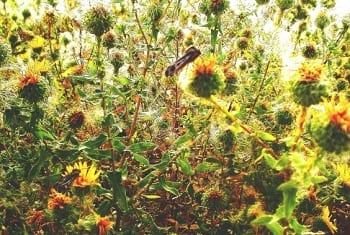 Due to the fact that gumweed doesn’t need much water, this makes it ideal for the dry desert conditions of Nevada. Miller said that it could be grown in places like Nevada where crops like corn or soybeans wouldn’t be grown.

Gumweed may have the potential to produce up to 600 million gallons of biofuel a year.

According to Miller, UNR researchers have managed to successfully create fuel by extracting hydrocarbons from the plant’s oil and are in the process of having it tested as diesel fuel. From this point forward it will be a question of refining the process to discover if it will actually make money for farmers.

Hongfei Lin, a collaborator in UNR’s College of Engineering, approximates that if gumweed was grown on only 10% of the thousand square miles in Nevada where sagebrush presently exists, each year the weed could produce approximately 400 million to 600 million gallons of biofuels.

Presently, Glenn Miller is leading the biofuel project in the second year of a four-year $500,000 grant from the United States Department of Agriculture.