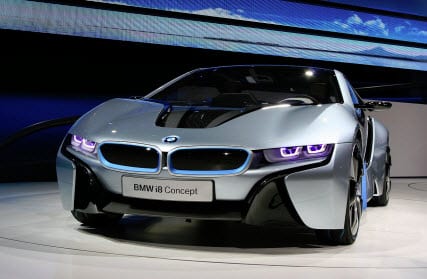 How does an all-electric car move from drawing boards to concept model to eventual production? After all, many cars over the past few decades began as concept vehicles, but never got off the ground into production. But BMW and other automakers are proving that concept cars can move past ideas and into consumers’ driveways.

Global automaker BMW recently launched its electric car BMW i3 Concept, as well as the BMW i8 Concept Spyder, in New York. The cars also were shown at the Nov. 2012 LA Auto Show. The all-electric Spyder was named the 2012 Concept Vehicle of the Year at the 11th annual North American Concept Vehicle of the Year Awards. Delighted consumers will be able to purchase the BMW i3 and i8 in 2013-2014, making them the first to drive the first purpose-built electric and hybrid-electric production vehicles made primarily from carbon fiber.

There are many voices calling attention to the benefits of electric vehicles. Environmentalists love the zero emissions and almost no fluids within the moving parts. Engineers love the higher performances and compositional makeup of the cars. Car geeks love the idea of greatly reducing the costs of maintenance and fuel, while the industry loves the forward motion of where cars are headed, leading to a greater, more potentially profitable environment. Plus, consumers are starting to pay attention: about 400,000 electric vehicles have been sold in the US in 2012, according to the Electric Drive Transportation Association.

For many years, concept cars usually stayed just concepts, or models that end up in an auto museum. Most concept cars are developed without a valid Vehicle Identification Number and usually aren’t designated for road use. Concept cars are often conceived with fantastic ideas within, to test limits, barriers and more for possible auto production. Concepts are shown and then withdrawn, occasionally showing up a year or two later with modifications. Think of the development as exercises in style, engineering or manufacturing processes to gage consumer reaction.

As with all high-concept ideas, the idea of practicality doesn’t always mesh well. How might one get auto insurance coverage for a concept car that can travel 250 miles an hour? How would you price that? Or what about a concept car touted to have impenetrable sides? How does collision coverage factor into that concept?

Pushing a car from concept to production can also be hindered by costs. Some scale-model concept vehicles can be produced for under $100K, but developing a full-size clay concept car for a major automaker is often far above that, even reaching as high as $300,000 or more. Most of the cash is used to pay skilled auto designers and modelers who might work on the concept for weeks and months. Plus, how many criteria factors must the concept car pass before moving ahead into production prototype? That checklist alone could make any auto executives stop a project in its tracks.

The future of electric cars is exciting, and brilliant minds stay committed to creating new electric models. Stay tuned and alert to see how concept cars might move into production models that you might be driving within a few years.