After collecting and analyzing over two years of data, and conducting live experiments, a team of researchers from the Geothermal Exchange Organization, Oklahoma State University and Oak Ridge National Laboratory, have concluded that geothermal heat pumps (GHP), outperform variable refrigerant flow (VRF), in regard to energy performance of heating and cooling systems, within a building.

The research was conducted in a “living laboratory”.

The data was gathered and analyzed in Atlanta at the headquarters of the ASHRAE (American Society of Heating, Refrigerating, and Air-Conditioning Engineers), where researchers created a “living lab”. The experiments conducted by the research team assessed the relative performance of GHP and VRF systems within the commercial building that was originally constructed in the 1960’s.

In order to be suitable for the experiments, the building was renovated. It was enlarged to be able to include the different systems so that they could be compared. As a result, the renovation resulted in a VRF system on the first floor, a ground source heat pump system on the second floor, and a dedicated outdoor air-system (DOAS) for both floors. 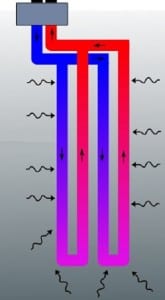 Over 1,600 sensors were added during the renovation to monitor heating, air-conditioning and ventilation operations and conditions within the building. The sensors data showed that in comparison to geothermal, the VRF system used two times the amount of energy, and when heating and cooling load differences were normalized, the GHP system used 44% less energy than VRF.

The research found that the geothermal system offers many benefits.

Jeff Spitler, one of the researchers on the project and a professor of mechanical engineering at Oklahoma State University, said that “Though the control strategy for the VRF system resulted in longer run times compared to the geothermal system, it is clear that the ground loop water supply temperatures were more favorable than ambient air temperatures for heat pump operation. This allows the geothermal equipment to operate at higher efficiencies.”

Spitler also said that during the two-year period of study, while maintaining similar zone temperatures, the geothermal heat pump system used 63% less energy in the winter/shoulder seasons and 29% less energy in the summer, compared to the variable refrigerant flow system. Thus, among its diverse benefits, the geothermal system maintains lower temperature levels, which makes it less expensive, resulting in better energy efficiency.