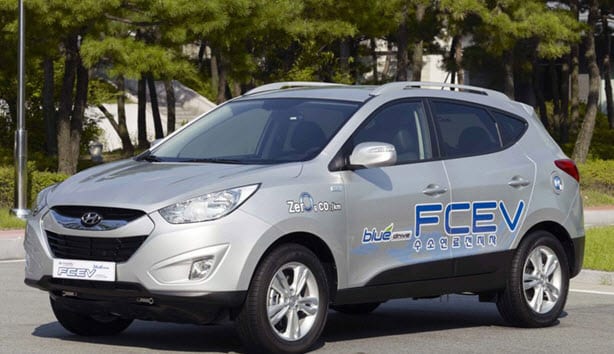 Hydrogen powered vehicles to be used at this year’s events

Automaker Hyundai attended this year’s Yeosu Expo in South Korea. The event attracts millions of visitors each year and boasts of high participation levels from

foreign countries and the companies calling these countries home. This year, the theme of the expo concerns alternative energy and sustainability. Hyundai was among the automakers that provided vehicles for the staff. Approximately 51 environmentally friendly vehicles were made available for the event, which will run through August 12, 2012. Hyundai’s hydrogen-powered Tucson ix is to be used at this year’s event.

Hydrogen fuel cells are quickly becoming a staple in the auto industry. These energy systems are capable of generating large amounts of electricity using hydrogen gas. The gas is generated by chemical processes occurring within the fuel cells themselves. The processes produce hydrogen gas, oxygen, electricity and water vapor, but nothing more, making fuel cells a truly clean energy system. Fuel cells have been targeted by the auto industry because of new regulations companies are beginning to face concerning fuel efficiency. These regulations are cropping up all over the world.

Tucson ix and others to be used for transportation

Hyundai has some ambitious plans for its fuel cell system. Though it was originally designed to power vehicles, the automaker has plans to expand the capabilities of the system. The company plans to use the fuel cell system at the Korea Pavilion. This will be the first time such an energy system will be used to power the Pavilion. Hyundai notes that this will be a key opportunity to show that hydrogen fuel cells can do much more than powerful vehicles.