Clean energy finds a strong advocate in the US military 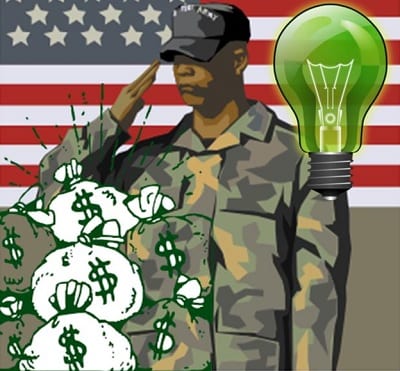 The U.S. military is making major strides in its pursuit of renewable energy. The Department of Defense has very ambitious plans when it comes to using clean power and abandoning fossil-fuels. The agency believes that energy is a matter of national security and that climate change represents a major threat. As such, it has tasked the various branches of the military to increase their adoption of renewable power. This means that the military has been spending more money on clean technologies and new energy systems, establishing the military, as a whole, as a leader in third-party energy financing.

The Department of Defense intends to receive no less than 25% of its electricity from renewable sources by 2025. In order to accomplish this goal, the country’s military has been focusing on making use of clean energy systems, such as solar panels, wind turbines, and hydrogen fuel cells. This also involves the adoption of energy saving policies. Since 2010, energy savings throughout the military rose by 115%, translating into more than $900 million in annual savings on energy consumption.

The number of energy projects being backed by the military has rose significantly over the past few years. In 2012, the support the military gave renewable energy projects rose by 54% and more than 700 projects are now associated with the various branches of the military. The Army currently considered the leader in energy conservation projects, with the Air Force, Navy, and Marines focusing more on energy production.

The military, as a whole, is moving toward more on-site energy production systems. The fuel that the military uses is transported from various sources. Fuel transports are typically high value targets and require a significant presence in order to ensure the security of fuel. On-site energy production can reduce the need for fuel transports, thereby keeping soldiers safer and cutting down on the costs associated with acquiring fuel and transporting in from location to locations.