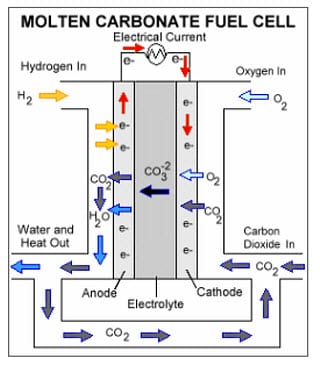 As the issue of energy continues to gain momentum throughout the world, more attention is being drawn to alternative energy.

Renewable sources of fuel, such as wind and solar, are emerging as a priority for many countries, especially the U.S. This focus on alternative energy is largely backed by rising prices on fossil-fuels, such as oil, and the potential threat of climate change. With more focus being directed at alternative energy, a new kind of hydrogen fuel cell is stepping into the limelight.

“New” is a relative term, of course.

Hydrogen fuel cells have been around since 1839, developed by Welsh physicist William Grove. In the nearly two centuries they have existed, fuel cells have only recently been met with worldwide approval. Typical fuel cells – proton exchange membrane fuel cells and solid oxide fuel cells – often get the majority of international attention. Molten carbonate fuel cells (MCFC) are beginning to change that, however.

MCFCs are large energy systems that use molten lithium potassium carbonate salt to act as an electrolyzer.

The molten salt powers chemical conversions that produce hydrogen, which the fuel cell then converts into electricity. These are massive energy systems, used often in industrial projects. One such fuel cell has recently been installed at the Orange County Sanitation District in California. This MCFC operates as a wastewater treatment system, using wastewater to generate massive amounts of hydrogen, which is then used by Air Products, a hydrogen production company, to power a fleet of vehicles.

These fuel cells are becoming more popular. A single MCFC is comparable to roughly 600 individual fuel cells and could be a good way for a company or industrial facility to become independent of an energy grid.