Wind energy is rapidly growing across America and while more wind turbines popping up on the landscape may be a plus for the country’s renewable energy efforts, for certain animals, like birds and bats, more turbines means a greater risk of death. In fact, for certain species of bats, deaths related to these giant wind apparatuses are so high that conservationists are worried about the species extinction. In an effort to help conserve the animals, researchers may have found a way to help these bats by tracking them to their origins via the bats’ own chemical fingerprints.

The researchers tracked how the bats were moving across the landscape.

A new study in the Appalachians – where the rates of wind turbine bat deaths are the highest in the United States (and possibly the world) – sought to understand how wind energy is affecting the two species, the eastern red bat and horay bats. The study was published in Ecological Applications.

The researchers behind the study used a type of chemical fingerprint known as stable hydrogen isotopes. The hydrogen isotope signature found in the bats’ hair showed where the animals had traveled, which enabled the scientists to use the genetic information to track the bats that have been killed in wind turbines located within these bat’s flight path in Virginia, West Virginia and Maryland. The information that was collected calculated the effective population seizes of the two affected bat species. 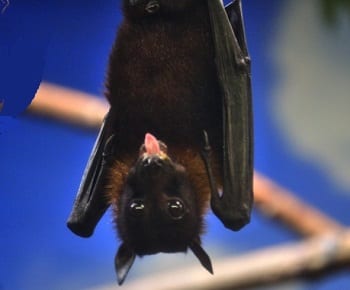 Ecology professor at the University of Maryland and co-author of the study, David Nelson, explained that “We’re kind of laying the foundation before conservation decisions can be made.”

Turning wind turbines off during migration season may help to decrease deaths.

In their findings, what the researchers found was that half of red bats killed in the area did not locally reside in the region, while nearly all the hoary bats summered close by. The researchers also discovered that the red bats represented a single, huge breeding population numbering anywhere from hundreds of thousands to millions, while the hoary bats were a smaller population, with a smaller breeding group between a couple of thousand to tens of thousands.

To help decrease the bat mortality rate, one strategy that has been suggested is curtailment. This is a process that requires shutting off turbines at certain times of the year or even single nights when it is likely that a mass migration will occur.

According to Nelson, typically, power companies have tried the curtailment strategy on a case-by-case basis, but his research reveals that most bat deaths occur during the fall migratory season. Therefore, the curtailment solution should work for the area because the bats usually fly only during calmer and less windy nights; times when wind turbines wouldn’t obtain maximum power output.