New hydropower project in Chile will be located in a desert

The country intends to make clean power via an unusual method.

Called the Mirror of Tarapaca, Chile’s unusual hydropower project plans to harness the nation’s incredible geography to generate renewable power. The project will be located in the Atacama Desert, one of the driest deserts in the world, and it will produce clean energy by pumping ocean water up the mountain during the day and releasing the water after the sun sets, according to a news article from TreeHugger.

The pumped storage hydro plant will use solar power to pump water up the mountain.

Even though pumped storage hydro plants are not new, what makes this particular one unique is that it will utilize solar power to suck up seawater into two reservoirs high in the Andes Mountains. The collected water is then released to rush back down the mountain via pipes to a hydroelectric plant, where electricity would be generated. Due to the fact that the Atacama Desert receives lots of sunshine and is located where the mountains meet the sea, it makes it an ideal location for this type of project. 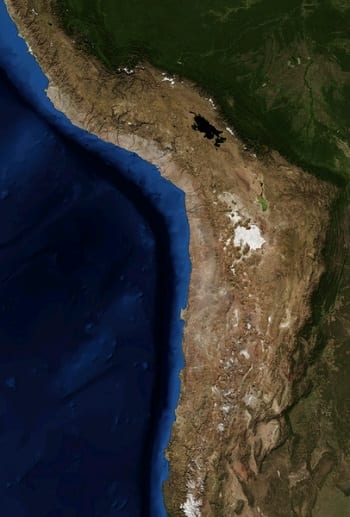 The reservoirs that will hold the seawater are natural depressions that were once ancient lakes. They are capable of holding enough water for 22,000 Olympic-sized swimming pools. They are located at the top of a 600 meter cliff. When released, gravity will pull the water down at a fast speed where the hydroelectric plant will produce energy 24 hours a day.

Francisco Torrealba, the strategy manager of Valhalla, the Chilean energy company behind the project, said of the desert that “This is the only place in the world where a project of this kind can be developed.” Additionally, Valhalla is looking at other locations within Chile that would also be well suited to this type of renewable energy system.

The combined solar and hydropower project has received approval from environmental authorities, but still requires additional investors to be able to begin construction by the end of 2016. It is estimated that it will take three and a half years to build and begin operations.