Owls could provide the solution for quieter wind turbines

New research may have found a way to reduce the sound produced by wind turbine energy generation.

A team of researchers at the University of Cambridge have discovered that the flight feathers found on the wings of large owls may hold the key in helping scientists find a way to develop technology that would decrease the amount of noise generated by wind turbines, which would be a huge bonus for the wind energy industry, which regularly receives complaints from people who live near wind farms that say the sound these turbines make is too loud.

The unique structure of an owl’s wing naturally reduces noise.

The owl has an intricate wing structure unlike any other bird, according to Professor Nigel Peake of Cambridge’s Department of Applied Mathematics and Theoretical Physics. Peake explained that most of the noise that occurs from the wing “originates at the trailing edge where the air passing over the wing surface is turbulent. The structure of an owl’s wing serves to reduce noise by smoothing the passage of air as it passes over the wing – scattering the sound so their prey can’t hear them coming.” 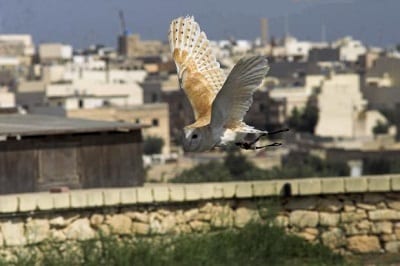 More specifically, what the researchers discovered is that the owl’s wing feathers create lift, feature a downy covering, a supple comb of bristles on the leading edge, and at the trailing edge there is an elastic and porous fringe of feathers, which help to reduce sound.

An owl-inspired prototype lowered noise generation made by full-sized wind turbines by 10 decibels.

The researchers from the University of Cambridge collaborated with researchers from Virginia Tech, Lehigh and Florida Atlantic Universities, to make a prototype material of 3D-printed plastic to copy the owl’s natural wing features.

After constructing their prototype, the researchers fit it on full-sized wind turbine blades and performed a test in a wind tunnel. The results of the test showed that the prototype managed to decrease noise generation by 10 decibels. This is not only a considerable amount (because noise is measured logarithmically), but it also managed to achieve this without having a drastic affect on aerodynamics.

The next step for the researchers is to test the coating that they have created on operational wind turbines to find out if they can improve power output while decreasing noise at the same time. In addition, researchers also believe that, eventually, this same owl-inspired, noise-reducing solution may be applied to airplanes.