Prices Drop on Electric Vehicles – But Is It Enough?

Electric vehicles (EVs) stand at a crossroads. High gas prices have peaked consumer interest, but most car shoppers are impatient with EV battery-charge times and unwilling to pay more than $30,000 for one. In fact, consumers want to spend the same amount for a green car that they would on a traditional vehicle, according to a study by the Global Manufacturing Industry group: 65 percent of Americans said they would not pay more for an electric car. EVs have recently come down in price, but is it enough to gain more of the market share?

Because the battery is one of the main components of an electric car, decreases in battery prices partially spurred the trending price drop. Between 2010 and 2012 alone, battery prices for electric vehicles have fallen 40 percent, Bloomberg New Energy Finance reports.

While electric vehicles are actually cheaper than gas-powered vehicles over the long haul, these lower sticker prices will help make them more competitive with gas-powered vehicles from the outset. General Motors recently announced a $5,000 decrease in its pricing for the 2014 Chevy Volt; the new Volt will have an MSRP of $34,995. While this is steep, EV purchasers are eligible for federal tax credits up to $7,500, depending on tax liability. And in July, the Ford Focus electric vehicle came down $4,000 in price, Time reported. Electric vehicles aren’t quite matching traditional gas-powered cars on pricing, but the numbers suggest that automakers are listening to consumer feedback on price points.

These price drops are occurring globally, as well. In spring the Nissan Leaf’s price dropped $6,400, and German auto maker Opel reduced the price of its Ampera electric vehicle by 8,000 euros to 38,300 euros (approximately $US50,400), Reuters reports. 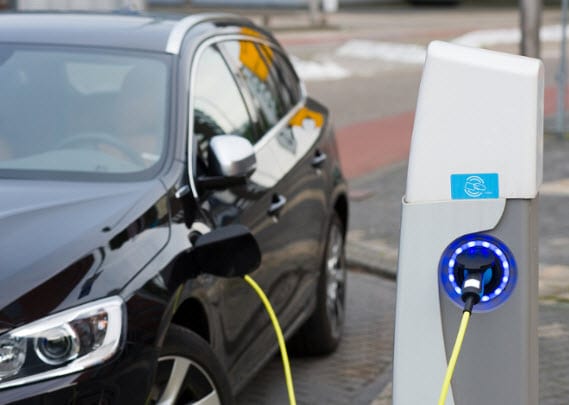 What This Means for Consumers

As car makers fully embrace green cars, including plug-in electric vehicles, the market will have a greater number of older model green cars available. While today might have slim pickings, in a few years, you may be ale to find a more affordable selection of electric vehicles at used car dealerships. For consumers wondering whether the time is right to trade in the gas guzzler for an electric car, the numbers demonstrate a commitment to the EV market.

Elliot is a grad student from Arizona who studies sustainability and writes about energy-efficient technology news.