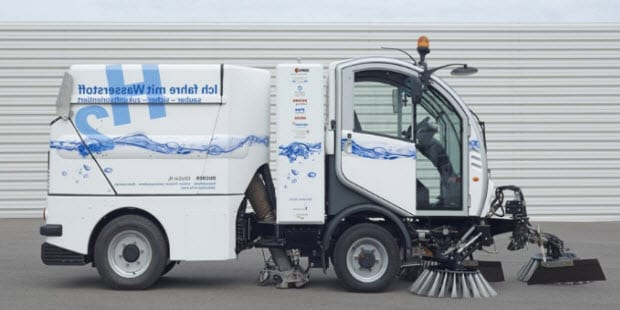 Since 2009, hydrogen-powered street cleaning vehicles have been undergoing testing in Basel, Switzerland.

These vehicles were designed to show the practicality of hydrogen energy. Since the test began, it has proved that hydrogen-powered utility vehicles save money, meaning that fuel cells are indeed viable. Though the vehicles in Basel have accomplished their goal of proving that hydrogen fuel is useful in the real world, Basel officials say that the cost of fuel cells and electric drives must drop significantly before they can become widely accepted.

This determination echoes that made by other organizations around the world, most of which have criticized the cost of hydrogen fuel cells.

Basel officials voiced their concerns to Empa’s Internal Combustion Engines Laboratory, leaders of the hydrogen utility project in Switzerland. Late last year, the lab developed a new hydrogen energy system called “Fuel Cell System Mk 2.” This system was designed to be a vast improvement on its predecessor. Today, the team working on the project has announced that the new fuel cell system is a success.

The new system is much more energy efficient and powerful than its previous incarnation.

Using these new fuel cells, the street cleaning vehicles consumer less fuel and can operate for longer periods of time before needing to refuel. The second generation fuel cell is also much less expensive because it uses fewer costly materials.