U.S. government sued for offshore fracking in the Gulf

Environmentalists take legal action against the American government regarding the risks of offshore hydraulic fracturing.

The U.S. government has been sued by The Center for Biological Diversity, an American non-profit membership organization that is well-known for the protection of endangered species and wild places, which alleges that the government did not release public documents that disclosed the extent and risks of offshore fracking operations in the Gulf of Mexico.

The lawsuit seeks immediate response from the federal government and disclosure of requested documents.

The lawsuit argues that the Bureau of Ocean Energy Management and the Bureau of Safety and Environmental Enforcement, must reveal reports, permits, emails, and any other documents pertaining to the American government’s approval for gas and oil companies to engage in hydrofracturing in the Gulf.

Kristen Monsell, a Center for Biological Diversity attorney, said that “The public has a right to know where, when and how much fracking the federal government is allowing in the Gulf of Mexico.” Monsell added that the practice has been concealed “in the Gulf, but we know this dangerous activity pollutes our water and air and poses a toxic threat to marine wildlife and fragile ocean ecosystems.” 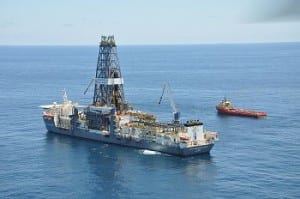 According to the environmental group’s lawsuit, in 2013, under the Interior Department, both the Bureau of Ocean Energy Management and the Bureau of Safety and Environmental Enforcement, have permitted gas and oil companies to frack a minimum of 115 offshore wells in the Gulf, or 15% of those scheduled for 2013.

Fracking may have major consequences.

A recent report released from Center scientists outlines the dangers linked to offshore hydraulic fracturing, which include air pollution, earthquake risks and toxic chemicals. The report indicates that the controversial mining practice has the potential to expose coastal communities to air pollutants, which could cause illnesses, such as cancer. According to the Center, gas and oil companies are permitted to inject fracking chemicals combined with wastewater directly into the water of the Gulf of Mexico.

Shaye Wolf, who works for the Center and who has a doctorate in climate science, said that what is taking place in the Gulf is unclear and people do not know what is actually happening. He added that it is not known what chemicals are mixed with the water to breakup (fracture) the rocks and it is unknown if fracking is leading to earthquakes.