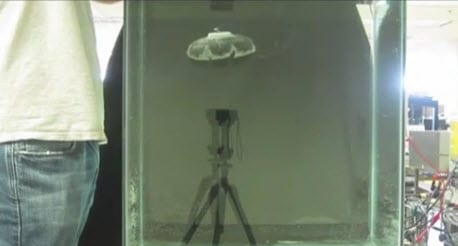 Researchers from the Virginia Polytechnic Institute have created a robotic jellyfish called Robojelly. The synthetic jellyfish was created using carbon nanotubes to grant it the same flexibility that its organic counterpart enjoys. The creation exhibits characteristics that make it a prime candidate for underwater search and rescue endeavors and may, one day, fulfill this purpose. One of the most intriguing aspects of Robojelly is that it may never run out of energy. The robotic jellyfish’s “skin” is coated in the same platinum catalyst material that is found in hydrogen fuel cells. This material creates chemical conversions that produce heat and hydrogen, which is used to power the robot’s muscle-like propulsion.

The Robojelly has only been tested in a small, controlled environment so far, but researchers believe that it can handle a real-world ocean environment. Researchers admit that significant work still remains to be done until they are ready to test this theory as losing the Robojelly due to a small flaw in design would be a costly mishap. Currently, research revolves around making the energy distribution of the Robojelly’s various segments more efficient.