Wind turbines of the future: Two blades may be better than three

Wind turbine energy may look different in the years to come.

Although wind farms featuring three-bladed wind turbines is the industry standard, some turbine manufactures, who are looking for ways to boost the efficiency of these huge devices to improve their wind capturing capabilities, are building two-bladed turbines and spinning the rotor 180 degrees to face downwind, to see if this will improve efficiency.

A two-bladed prototype is being built by 2-B Energy.

According to The Maritime Executive, 2-B Energy, a company from the Netherlands, will be constructing a prototype of a two-bladed turbine to capture offshore wind. The 2B6 turbine will have a 6 MW (megawatt) capacity, is expected to provide energy to an estimated 5,000 households by 2030, and will be located off Eemshaven.

Financial support for the 2B6 wind turbine project is coming from the Ministry of Economic Affairs, Shell, and European investment company, Capital Truffle. 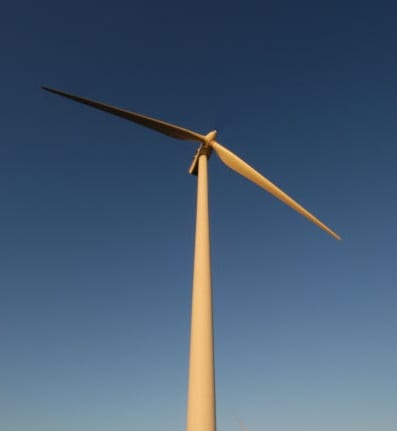 In addition to 2-B Energy’s prototype, the Crown Estate announced that it also intends to build two-bladed offshore wind turbines with 2-B Energy subsidiary, Forthwind Limited. The turbines will be built off Methil, Scotland.

Two-bladed wind turbines have many benefits and drawbacks.

The major advantage of a turbine with two blades, which should come as no surprise, is that it is cheaper to build. The reason, of course, is it requires less material, which also makes it easier to install. It is the estimation of wind industry leaders that turbines with two blades could cost nearly 20% less to build and install compared to the conventional three-bladed turbines, and yet still generate the same amount of power.

Furthermore, without the third blade, the turbine’s rotor is lighter, giving engineers the ability to position the rotor on the downside of the tower, which could help to improve efficiency. In addition, due to the fact that it is easier to install two blades compared to three, these turbines could be constructed on site and built on shore, as they can weigh up to 40 tons less than traditional turbines. Constructing rotors on shore and transporting them to their designated location is easier than having to construct them offshore.

That being said, there are a few problems with these two-bladed wind turbines, as well. The biggest issue seems to be the turbine’s ability to function efficiently in strong wind conditions. The light and flexible blades may be beneficial for cost, but it also increases the potential for these blades to spring back and hit the turbine tower in strong winds. Moreover, these turbines may be lacking sufficient balance. For example, when the top blade is in the wind, the bottom blade is protected by the tower, which can place unnecessary wear on the bearings.

At the moment, while two-bladed wind turbines show a lot of future promise for the wind energy industry, they still have a long way to go before they’ll ever replace the traditional three bladed models.