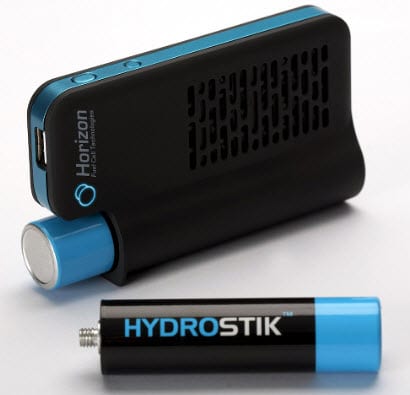 Apple developing new hydrogen fuel cell system, but the company is not alone in the field

Late last year, technology giant Apple filed patents for a portable hydrogen fuel cell system that could be used to power mobile devices and computers. The company’s interest in fuel cells had an immediate effect on the industry in that hydrogen energy become more credible almost immediately. Apple is not the first to show interest in mobile hydrogen fuel cells; however, as a handful of other technology companies have been working toward making such systems for years. Companies like PowerTrekk have developed portable fuel cells that are often referred to as “fuel cell batteries.”

PowerTrekk has developed a small hydrogen fuel cell that acts as a USB charging device. This fuel cell can be connected to mobile devices and computers and charge the batteries of these electronics. The small charger contains sodium silicon powder. When water is added to this power, hydrogen gas is produced. The small fuel cell then converts this hydrogen into electricity, which can be used for nearly any purpose. The company expects that its fuel cell will go on sale later this year.

Horizon Fuel Cell Technologies, a developer of fuel cells based in Singapore, has also created a portable fuel cell battery called the MiniPak. Like the PowerTrekk device, the MiniPak can be plugged into a mobile device via a USB connection. The small fuel cell can produce 2 watts of continuous power. The MiniPak is equipped with a metallic sponge that absorbs hydrogen molecules and converts them into a solid state. When heat is applied to this solid matter, the molecules are released.

There are several other companies that are developing portable hydrogen fuel cells that are meant to charge mobile devices. Apple can expect to face strong competition, though the company has a long history of faring well against others in similar markets. Apple’s major competitor in the field of mobile fuel cells is expected to be Toshiba, who is currently developing a fuel cell that generates electricity using methanol instead of hydrogen.