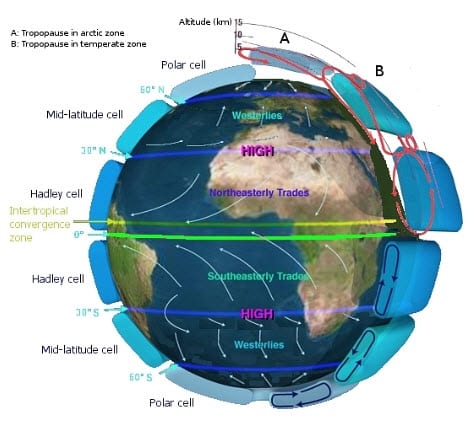 Wind energy could be enough to satisfy the entirety of the world’s energy demand, according to a new study from the Carnegie Institution for Science. With the help of researchers from the Lawrence Livemore National Laboratory, Ken Caldeira of Carnegie’s Department of Global Ecology has examined the potential of wind energy systems. Current technology may be lacking, but atmospheric wind energy systems of the future could sufficiently solve the world’s energy problems without introducing serious climatic consequences.

Researchers from the Lawrence Livemore National Laboratory, led by Kate Marvel, collected data on surface wind energy systems as well as theoretical atmospheric wind energy systems. The latter refers to wind turbines that are used at high altitudes. These systems could harvest the powerful winds that occupy this region, which are typically constant and enough to keep a wind turbine generating electricity as long as the technology itself is functional. The study suggests that these wind energy systems could be sufficient enough to power the entire world.

Surface wind energy systems may also be capable of powering the world, but not without cost. Wind turbines interfere with wind currents, creating drag and generally slowing down the flow of wind. Researchers note that there is a balance between the number of wind turbines that exist in the world and their ability to generate electricity. The more turbines there are, the more electricity is produced through these systems. Eventually, however, there will be too many turbines interfering with wind currents, making the flow of wind weaker and weaker. Thus, after a certain point, more wind turbines will no longer mean more electricity. Such a problem does not exist with atmospheric wind energy systems.

Atmospheric wind energy may be the solution to the energy problem

The study shows that more than 1,800 terrawatts of electricity can be harvested through the atmosphere. The entirety of the world uses, approximately, 18 terrawatts of electricity. The study suggests that this can be easily met with surface wind energy systems, which could produce up to 400 TW, but not without environmental consequences. Thus, atmospheric wind energy systems may be the best solution to the energy problem.