Californian homes to be provided with free solar panels

A new plan in California will bring free solar power to disadvantaged neighborhoods.

While there are already many government incentives in the state of California to encourage the use of solar power among residents, a new plan will result in free solar panels being installed on the rooftops of homes of some of the state’s low-income homeowners, saving each of these residents hundreds of dollars in electrical costs, annually.

Solar energy continues to be an expensive home improvement.

According to a 2013 study by the Center for American Progress, a liberal research and advocacy group, 67% of solar arrays installed on homes in California belonged to homeowners with a median household income (between $40,000 and $90,000), while wealthier homeowners made up nearly the remaining percentage.

However, the new program will work on bringing the benefits of this renewable power to lower-income families, by using money raised through California’s cap-and-trade system. This is system that makes factories, oil refineries, power plants, and other big businesses buy credits for every ton of greenhouse gasses they send into the atmosphere. According to SFGate, $14.7 million that has been raised through the cap-and-trade system will be used for the free solar project.

The free solar panels initiative will be led by Grid Alternatives. 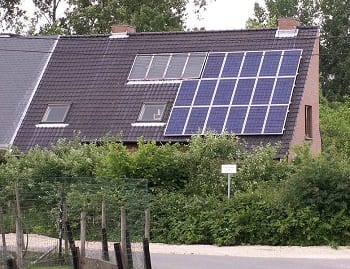 The Oakland-based non-profit solar company, Grid Alternatives, will install the solar panels. Developing and carrying out solar and energy efficiency projects for working-class communities is a specialty of this company.

The Grid Alternatives communications director, Julian Foley, said that “These systems are saving families money every month for food, for clothes, for medical expenses.”

While the installations are free, many of the homeowners receiving the solar arrays are asked to make a small contribution for the installation. This may include agreeing to help out with the installations themselves or feeding the crew who install the array. The installers come from job-training programs and the project uses donated equipment from Bay Area solar companies like Enpahse, SunPower, and SunEdison.

By the end of 2016, Grid Alternatives will provide more than 1,600 free solar panels systems using the cap-and-trade money. Depending on where customers live, the arrays that are installed are expected to save the majority of homeowners between $400 and $1,000 every year on electricity.