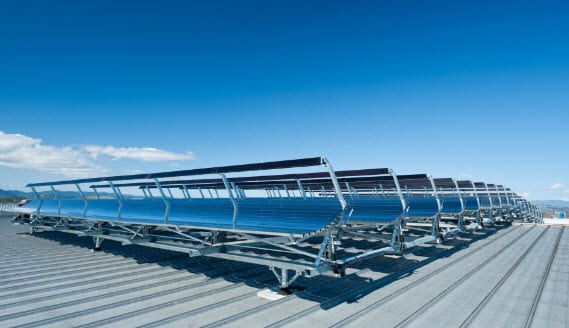 Winery gets a gold star for alternative energy.

Cogenra Solar, a developer of hybrid solar energy systems, has unveiled the largest rooftop hybrid solar energy system in the U.S.  The system combines solar and thermal power, a coupling that is gaining a great deal of interest in the alternative energy and technology communities. The system can be found at the Kendall-Jackson winery in Windsor, California. It was meant to augment the existing alternative energy systems of the winery and help it break away from its restraints to fossil-fuels and reduce its environmental impact.  The system currently saves the winery more than $30,000 in energy costs each year.

The rooftop system accounts for 60% of the winery’s demands for electricity and hot water.

[German] Texas will be home to the ...
➡️PLAY THIS HYDROGEN NEWS ARTICLE IN: ENGLISH, FRENCH & GERMAN
The two will collaborate again when they install a similar system at Kendall-Jackson’s Vinwood estate in Sonoma County. The two will install an additional energy system at the Kendall-Jackson winery in Monterey County.

The expansive rooftop energy system has caught the attention of Congressman Mike Thompson, who is praising Cogenra for its efforts. Congressman Thompson believes that the system is a feat of engineering and signals a major victory in helping the environment.  Thompson’s praises are echoed by the federal government at large, which has recently become enamored with solar energy. The government is funding a number of projects that are aimed at making solar energy a viable alternative to fossil-fuels. This initiative is meant to help the country break its dependence on foreign sources of fuel, such as oil from the Middle East.