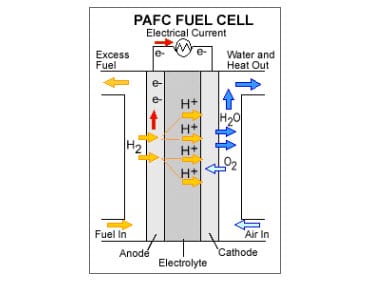 Researchers from the Max Planck Institute in Stuttgart, Germany, and the New York University have released a new study concerning their experiments with a new kind of fuel cell and fuel cell electrolyte. The study, published in Nature Chemistry, shows how protons behave while immersed in phosphoric acid. This behavior could be quite promising for fuel cells because it may increase their efficiency and performance. Researchers believe that their findings will help make fuel cells, as a whole, a more popular energy option for commercial use.

Uncommon fuel cells could be made popular in commercial market

The behavior of protons in acidic substance

In these fuel cells, phosphoric acid acts as an electrolyte, allowing protons to be transported throughout the fuel cell. Researchers have been working on understanding how protons behave while in the acid in an effort to manipulate the acid to be more efficient. Currently, the acid is the most conductive substance for protons produced by the chemical reactions within the fuel cell. The study shows that the acid is much more conductive than other substances that are used in conventional fuel cell models.

Researchers have conducted experiments with phosphoric acid and have found that protons behave very cooperatively while immersed in the substance. These tests have also shown that the movement of protons through the acid for prolonged periods of times can cause high amounts of stress on the components of a fuel cells, thus making the process less efficient than expected. Researchers believe that the acid can be used in other fuel cells without these units sacrificing performance, though it may mean a loss in efficiency for fuel cells that are meant to operate for long periods of time.