Fracking linked to elevated levels of radon gas in Pennsylvania

A new study by researchers at the Johns Hopkins Bloomberg School of Public Health, found an unsettling connection between high levels of radon gas, a dangerous odorless and colorless radioactive gas that has been linked to lung cancer, and the gas and oil mining technique known as hydraulic fracturing or fracking.

Radon levels are usually higher in regions where hydrofracturing operations are in production.

The study, which was recently published in the Environmental Health Perspectives journal, revealed that levels of radon gas are generally higher in areas of Pennsylvania where fracking is occurring.

In an interview with Yahoo News, Joan Casey, an environmental health scientist, explained that she and her colleague at Bloomberg wanted to find out the sources behind the radon in Pennsylvania homes. Casey said that “We decided to do the study because historically Pennsylvania has had this big radon problem. We were doing house studies in the state for about the past decade. When the unconventional natural gas industry moved into the state, people were concerned.”

In spite of the correlation found the study does not directly link fracking with radon. 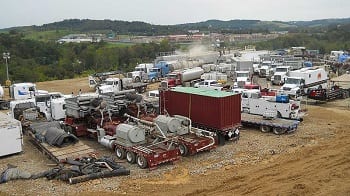 While the researchers have pointed out that their study doesn’t directly link increased radon levels to fracking, and that there could be other potential factors at play, they remain suspicious of fracking.

The reason is the researchers worked with Pennsylvania’s Geisinger Health System, and analyzed over 860,000 indoor radon measurements gathered by the state’s Department of Environment Protection from the years 1989 to 2013. The researchers also compared the gas readings to several other factors, such as weather, underlying rock layers, and community wealth.

What they found was that buildings that depended on well water had higher indoor radon readings compared to buildings that relied on municipal water. They also learned that first-floor readings in the summer were often higher in homes that were close to fracking wells than those that were further away from these sites.

Furthermore, the researchers found that radon levels appeared to spike about the same time fracking began in Pennsylvania (around 2004), in homes near drilled wells.

While further study is required to directly link fracking to increased radon levels, the findings of this latest research is alarming, especially since, according to the National Cancer Institute, every year an estimated 15,000 – 22, 000 people die from lung cancer caused by radon, which makes it the second-leading cause of lung cancer in the U.S.