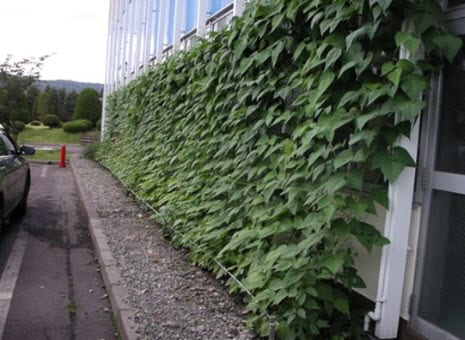 The Kyocera Group, a multinational electronics manufacturer based in Japan, has taken an innovative approach to reducing the demand for electricity in its homeland. The company, which is a leading producer of solar power systems with a keen interest in energy efficiency, has taken to growing what it calls “green curtains” on buildings throughout the country. These Green Curtains are comprised of large, leafy foliage that covers the sides of buildings. The growth of these curtains has been sporadic over the past several years, but Kyocera has recently become more aggressive with its Green Curtains.

This year, Kyocera’s growth of its Green Curtains has increased by 30% over what it had been in 2011. The curtains are designed to grow in such a way that they cover the windows of a building, allowing limited amounts of sunlight to trickle in. Kyocera claims that its curtains are able to keep buildings cooler, thus cutting energy costs during the hotter months of the year. By reducing the need for air conditioning, the Green Curtains could potential save companies a significant amount of money on energy costs.

Demand for energy efficiency has been on the rise since Japan shut down its last nuclear power plant earlier this month, signaling the end of nuclear power for the country. Japan has all but abandoned nuclear energy in the wake of the Fukushima disaster of 2011, which is considered to be the worst nuclear crisis since the Chernobyl event. Turning away from nuclear power has created an energy gap in the country. While Japan has been working to adopt alternative energy more aggressively, the need for more efficient uses of electricity has become paramount.

Green Curtains may expand to other countries in the future

Kyocera’s Green Curtains are becoming more popular in Japan as more companies make an effort to be sustainable in terms of energy. If the trend continues, the innovative concept may spread to other countries where energy efficiency is considered a serious issue.