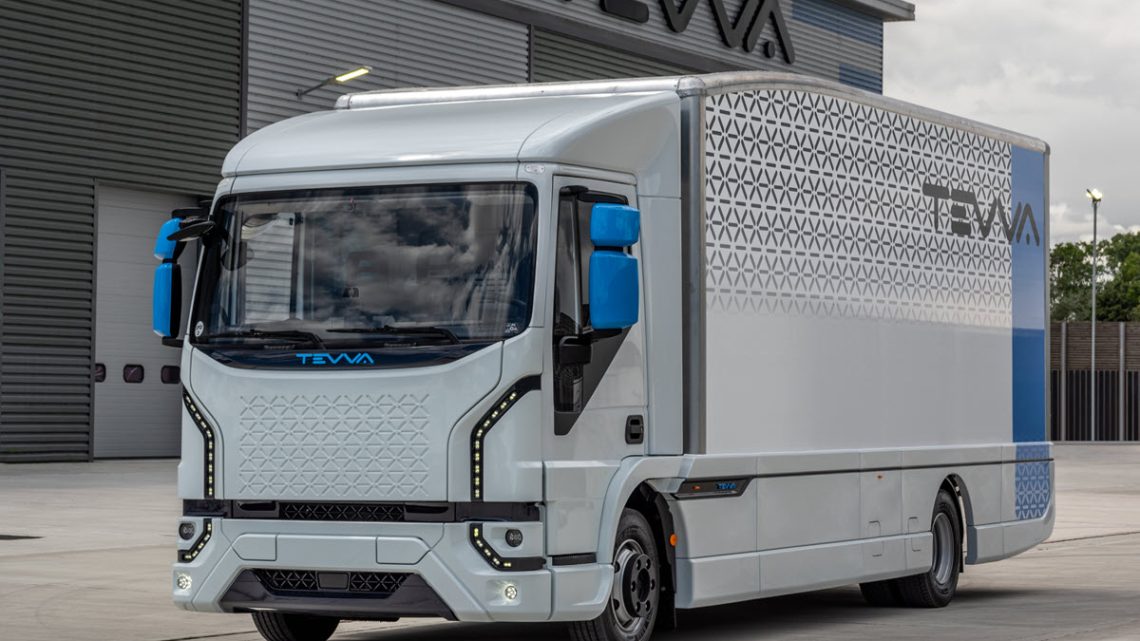 The Tilbury-headquartered scale-up, which has so far raised $140m in funding, will unveil its hydrogen electric vehicle alongside its latest full-battery electric HGV at the Road Transport Expo in Warwickshire.

Hydrogen has been used safely in buses and other vehicles in more than twenty countries for many years and has a higher energy density than lithium-ion batteries or even diesel. Because of these properties, it is particularly attractive for use in larger, commercial vehicles.

By adding a hydrogen fuel cell system to its battery-electric HGV design, Tevva is delivering zero-emission solutions that will work for the overwhelming majority of fleet operators across a range of industries and sectors. The fuel cell system tops up the battery, extending the vehicle’s range and allowing the truck to carry heavier loads over longer distances.

One advantage of using the fuel cell as a range extender, rather than the primary source of power, allows Tevva to smaller, cheaper and lighter fuel cells and operate these at the highest possible efficiency.

Tevva’s 7.5-tonne hydrogen electric truck comfortably meets (and exceeds) demanding duty cycles for nearly all urban and extra-urban use cases. Tevva’s innovation means that its customers can drive for longer (with a range of up to 310 miles or 500 kilometres) and will have reassurance because of the technology’s reliability and safety.

Crucially, hydrogen refueling typically takes a similar time to diesel truck refueling (5-20 minutes) and the dual-use of both battery electric and hydrogen energy sources future proofs Tevva and its customers as the transition away from fossil fuels and the decarbonisation of the transport industry continues. In 2019, for example, HGVs contributed 18% of the country’s greenhouse gas emissions in the transportation sector, according to UK government figures.

Alongside its 24/7 customer support, Tevva will offer hydrogen services to customers, helping customers to access sustainable and affordable hydrogen supplies safely and conveniently, alongside their purchase or lease of Tevva Hydrogen Trucks.

Tevva is on-boarding diverse hydrogen suppliers that can provide innovative and hydrogen services to cater to the needs of our growing customer base.

Tevva CEO and founder Asher Bennett said: “We are excited to launch our hydrogen electric HGV, creating a landmark moment for Tevva and UK manufacturing. We firmly believe that the post-fossil fuel future, which is quickly approaching, will see a new range of technologies and fuels take centre stage in the transport industry.

“By embracing hydrogen, we are future proofing ourselves, our clients and the industries and communities they operate in.

“We also pride ourselves on the fact that our vehicles are safe, reliable and go the distance. Combined with our commitment to customer service, we believe that Tevva’s hydrogen electric truck will be a popular choice for fleet operators across the UK, Europe and eventually North America.

“I am extremely proud of the hard work the team at Tevva have put into this vehicle. We have reached this milestone by leveraging our years of experience designing, innovating and manufacturing dual-energy vehicles.”

Transport Minister Trudy Harrison said: “Hydrogen fuel cells and other zero emission technology will be vital in helping us decarbonise transport. A thriving UK hydrogen industry could not only help us meet our climate change obligations, but also support thousands of jobs across the country in years to come. 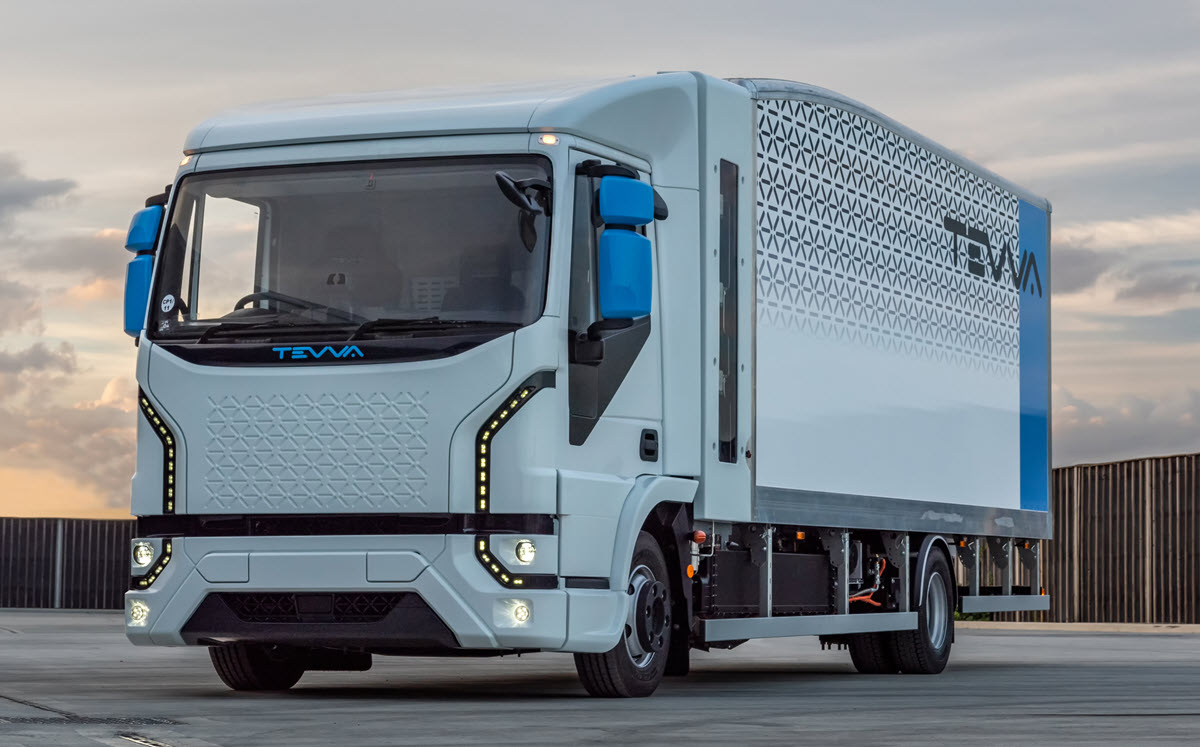 “UK-based manufacturers like Tevva continue to build on the skills and expertise we have in hydrogen in the UK, developing new technologies, supporting economic growth, and working towards net zero.”

Zoe Hall, Head of Competitions and Projects, Advanced Propulsion Centre, said: “I am very proud that the technology we have supported through our collaborative research and development programme is now being put to real-world use.

“The launch of this truck, with its hydrogen fuel cell range extender, is an exciting outcome of the APC-funded project to completely eliminate CO2 at the tailpipe and lower the total cost of ownership compared to existing diesel vehicles. This smart zero-emission vehicle, with rare earth metal free electric motors, has the potential to make heavy goods transport sustainable.”

Ben Nyland, Loop Energy President & CEO, said: “We are extremely happy to provide our fuel cell system to power the revolutionary zero-emissions truck Tevva is bringing to market. From the tender process through to the integration of the first vehicles, we have been consistently impressed with the vision and execution of the entire Tevva team.

“Trucks like Tevva’s hydrogen-electric platform will be critical to achieving the emissions reduction targets necessary to address climate change. Their commitment to scale quickly reflects the sense of urgency with which the transportation industry needs to approach the deployment of zero-emission commercial vehicles.

“We believe the combination of Tevva’s proven range-extended platform with Loop Energy’s leading fuel cell system can be a key contributor to the decarbonization of transportation in Europe and North America. We look forward to a very fruitful relationship over the coming years.” 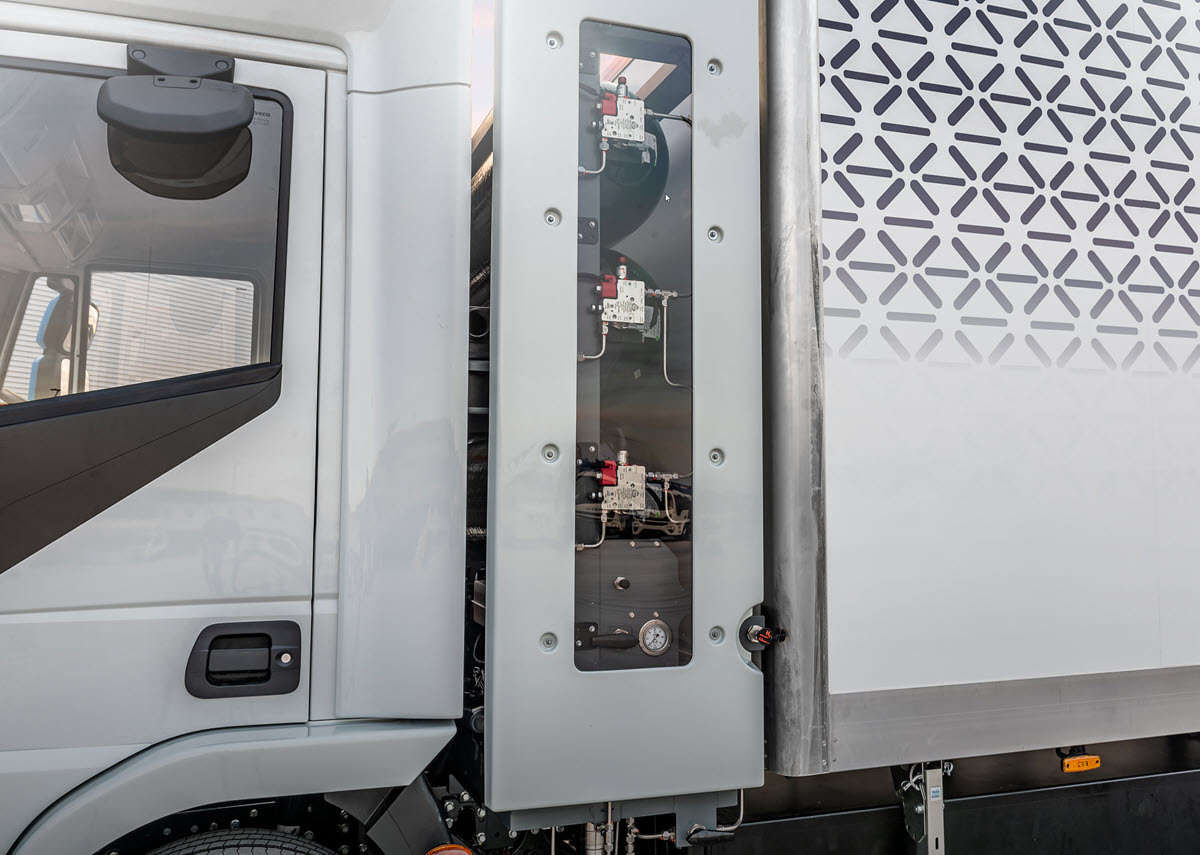 Specifications of the hydrogen-electric vehicle:

“We do technology because it matters and makes a difference to humanity.”

Tevva is an electric truck company with a spectrum of options for zero-emission medium to heavy-duty trucks.  Our revolutionary hydrogen fuel-cell range extension technology allows our vehicles to do all the work of a diesel, with total peace of mind about cost, range and environmental impact.  Tevva is leading the drive to zero-emissions freight and urban logistics.  We have vehicles on the road already, getting the job done, and are focused on optimising green hydrogen solutions as part of our proposition.