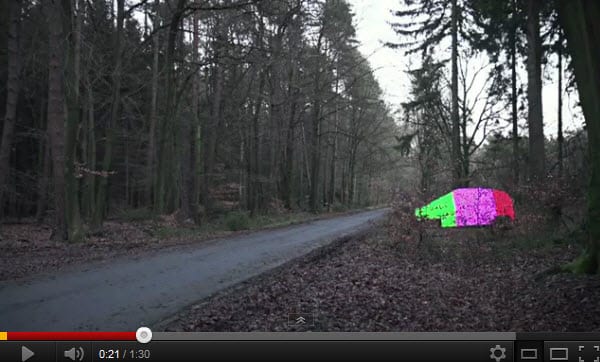 As part of its ongoing F-Cell World Tour, Mercedes-Benz spent a week in Germany showing off their new invisible car.

The car is a hydrogen-powered SUV and is not actually invisible, but was made to appear so with the use of LED-embedded materials. The automaker is trying to convey the idea that their vehicle produces absolutely no harmful emission. This means that from an environmental stand point, the car is virtually invisible. People throughout Germany have responded well to the campaign thus far.

Using a simple camera and material containing thousands of LED displays, Mercedes-Benz was able to make their car disappear – sort of.

The vehicle did not, of course, vanish from sight. The camera attached to one side of the car fed images to the side that was covered with the LED material, creating the illusion that it was transparent. Though the vehicle created an interesting anomaly, it was still clear to see, except at night when the vehicle’s camouflage worked much better than expected.

In 2010, Mercedes-Benz embarked on a tour that would take their hydrogen-powered cars all over the world.

The trek supposedly ended when the vehicles had arrived in Germany, but the tour seems to have a lot more to accomplish before it can reach its conclusion. Mercedes-Benz hopes that the overall campaign will help consumers understand and get excited for the upcoming release of the company’s line of hydrogen-powered vehicles.