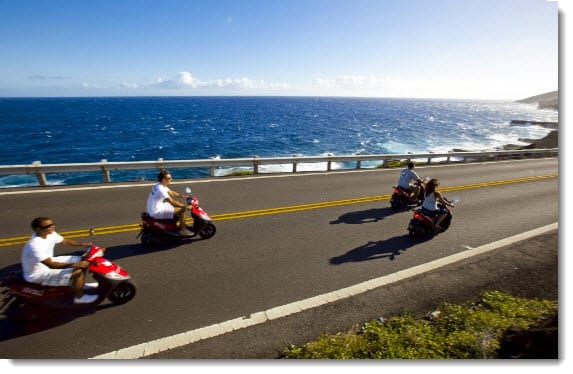 H2 Technologies teams with APFCT to bring scooters to the U.S.

Hydrogen scooters could make an appearance in 2013

Current plans concerning the hydrogen scooters has H2 offering them as rentals for tourists. This will be the first stage of their induction into the U.S. market. H2 will be testing the waters for the hydrogen scooters, so to speak. The scooters have tentative plans to be launched in Honolulu as soon as 2013. If the vehicles prove popular amongst consumers, H2 will likely pursue their commercialization more aggressively.

Hydrogen transportation is beginning to gain a great deal of momentum. Currently, hydrogen-powered passenger vehicles, such as sedans, have taken much of the spotlight. Fuel cells have managed to capture the favor of automakers and consumers alike due to their powerful and efficient nature. They are not without their criticisms, however, as fuel cells are quite expensive to manufacture, a fact that increases the overall price of the vehicles they are used in. Hydrogen scooters are considered a viable way to introduce hydrogen transportation to consumers more affordably. The fuel cells required for the scooters are smaller, thus more affordably produced, and require less fuel to remain operational.

Hydrogen scooters can travel 50 miles before needing to refuel

APFCT notes that the hydrogen scooters can travel for 50 miles before needing to refuel. The scooters are equipped with two small canisters that serve as hydrogen fuel tanks. The top speed of the scooters is approximately 35 miles per hour. APFCT has demonstrated the capabilities of the hydrogen scooters at the Asia Pacific Clean Energy Summit and Expo that was held this week at the Hawaii Convention Center.