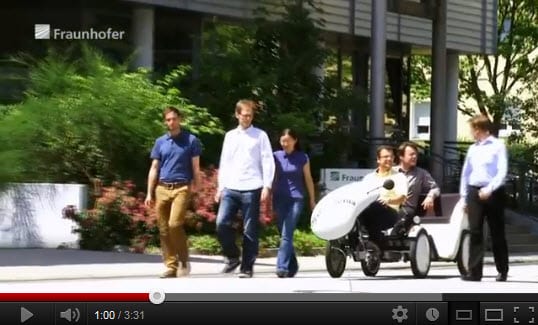 *Video is in German

Engineers from the Fraunhofer Institute for Manufacturing Technology and Advanced Materials in Desden, Germany, have begun demonstrating the world’s first hydrogen-powered rickshaw. The Hydrogenia, as it is called, is being operated on the streets of Freiburg and Dresden. Engineers believe that hydrogen fuel cells would be an adequate replacement to the widely used batteries that power electronic bikes and other such vehicles. Fuel cells would enable these bikes and, in this case, rickshaws to travel further without the need for frequent recharging.

The Hydrogenia is equipped with a 250 watt hydrogen fuel cell and a fuel tank installed beneath its seat. The rickshaw can be refueled in a matter of minutes and can travel for more than 120 miles on a single tank of hydrogen fuel. The Hydrogenia’s fuel tank proved to be the most difficult aspect of the rickshaw’s creation. Engineers had to find a way to make a durable tank small enough to be used for the vehicle that was capable of storing hydrogen fuel at 20 bar pressures.

Hydrogen transportation gaining traction all over the world

Hydrogen fuel is already popular throughout the auto industry and has been gaining ground in public transportation. Thus far, the fuel has been mostly reserved to the realm of large and moderately-sized passenger vehicles, such as buses and sedans. As electronic bikes and rickshaws grow in popularity, however, hydrogen fuel cells are becoming popular replacements for the lithium-ion batteries that are often used with such vehicles. The commercialization of the Hydrogenia, as well as other forms of hydrogen transportation, will be entirely dependent upon the availability of hydrogen fuel stations.

Infrastructure may delay the progress of hydrogen transportation significantly

Infratsurcture continues to be one of the most prominent roadblocks keeping hydrogen transportation from reaching widespread commercialization. The Hydrogenia is well positioned in Germany, where a number of hydrogen fuel stations currently exist, but hydrogen transportation projects in other parts of the world may not fare as well due to the lack of a comprehensive fuel infrastructure.