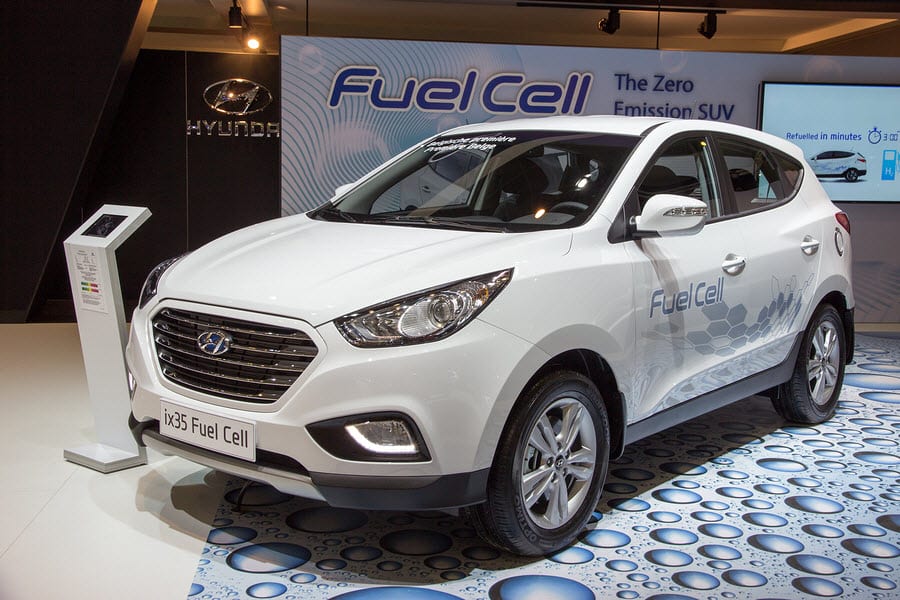 New clean vehicle model expected to be launched in 2018

South Korean automaker Hyundai is preparing to release another clean vehicle equipped with a hydrogen fuel cell, but it may not be available until early 2018. The company already has a fuel cell vehicle available, called the ix35, and it began delivering the first of these new cars to the United States in June of 2014. Since then, other major automakers have released their own fuel cell vehicles, some finding modest success with their offerings. Hyundai’s new vehicle, however, could prove to be more attractive than its predecessor, with the company expecting it to be as much as 30% more efficient.

The current model of Hyundai’s fuel cell vehicle made headline s two years ago due to its performance and efficiency. Hyundai was one of the first automakers to offer such a vehicle throughout the world, but has since fallen behind in terms of the efficiency of its competitors. The current ix35 model has an EPA-rated range of 265 miles, well behind the 366 mile range of Honda’s forthcoming Clarity Fuel Cell and the 312 mile range of the Toyota Mirai. Hyundai aims to address this issue, of course, by renovating the ix35 powertrain, equipping the new model with a more efficient and powerful fuel cell system.

New vehicle could see launch in South Korea and California

Hyundai has plans to launch the new ix35 model in January of 2018. The vehicle is expected to be priced at $50,000, which will be reduced thanks to subsidies provided by governments in several markets. Where the new fuel cell vehicle will be launched is not yet known, but South Korea and California have been the company’s most attractive markets for such vehicles. How well the new vehicle will compete with other cars equipped with fuel cells is uncertain, but Toyota and Honda are the automaker’s only significant competitors in this particular field of clean transportation.

Hyundai has plans to launch a hydrogen-powered bus as well

Hyundai is not only planning to launch a new version of the ix35 fuel cell vehicle, of course. The automaker recently announced plans to build a hydrogen-powered bus. The bus is expected to be released at some point in 2017. The bus will serve as yet another step in making the public transportation space more environmentally friendly. It is likely that Hyundai’s bus will compete with a similar offering coming from Toyota, which is also expected to be launched in 2017.