Initiative for electric vehicles rolled out in Seattle

A new city initiative implemented in Seattle is designed to improve infrastructure for EVs.

Drive Clean Seattle was recently announced by the city’s mayor Ed Murray. To help reduce carbon emissions and pollution from transit, the green initiative seeks to improve infrastructure for electric vehicles (EVs). This will not only include installing more public charging stations to help encourage drivers to make the switch to electric cars, but will also include electrifying the city’s own vehicle fleet, reported Capitol Hill Seattle.

The initiative has big goals and will need to aim high to achieve them.

To start, the city intends to “lead by example” and work on lowering carbon emissions from its vehicle fleet by 50 percent. It intends to achieve this goal by investing in vehicles with higher fuel efficiency as well as fully electrically-powered vehicles. It also plans to figure out how to reduce car idle times.

Additionally, Murray wants to support the adoption of 15,000 EVs by 2025. The mayor says that this can be achieved by tripling the amount of direct current (DC) rapid EV charging stations in Seattle for all EV models on both public and private property. It will also include exploring diverse ways in which the city can help finance and install home charging stations for residence. Two pilot projects have been suggested in regard to the residential EV charging installation effort. The first is on-bill repayment system for the installation of these stations. The second involves a time-of-day-pricing for the actual charging. 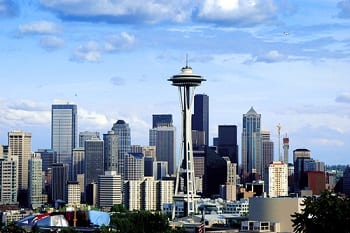 In a statement, Mayor Murray said that “We will work with residents, transit agencies, and businesses to promote the use Seattle City Light’s carbon neutral electricity to move around the city. Transportation is Seattle’s leading source of greenhouse gases and this plan will allow us to work aggressively to reduce climate impacts.”

Seattle is counted among the U.S. cities considered to be hubs for electric vehicles.

In terms of having both EV usage and infrastructure, Seattle has been considered in the past to be one of America’s electric vehicle hubs, especially when considered to other major cities in the country. In fact, the International Council On Clean Transportation ranked Seattle as the fifth highest new EV sales share and the third most wide-ranging publically accessible charging infrastructure.

However, despite receiving this title, Washington’s largest city is lacking in publicly accessible EV charging stations. The new Drive Clean Seattle initiative hopes to change that.

Presently, all the proposals, including the pilot projects for the initiative are still only concepts. While the city has a clear idea of what it would like to accomplish to improve its infrastructure for electric vehicles, it has not yet worked out the technicalities of its proposal nor does it have any concrete numbers in regard to the cost of such an investment.