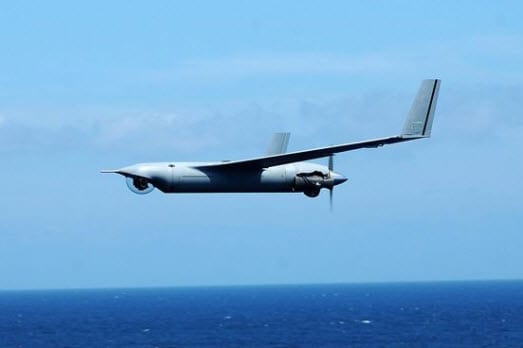 Insitu Inc., a manufacturer of unmanned aircraft based in the U.S., has announced that its hydrogen-powered unmanned aerial vehicle (UAV) ScanEagle has successfully completed its first flight. The ScanEagle is the result of collaboration between Insitu, the Naval Research Laboratory and United Technologies, owners of UTC Power, a manufacturer of hydrogen fuel cells. The successful flight marks one of the first times hydrogen has been used to power a UAV. At present, Insitu one of the few U.S. companies that have successfully tested hydrogen fuel with unmanned aircraft. Another is AeroVironment, whom in 2011 successfully flew its Global Observer UAS aircraft for approximately 18 hours.

The ScanEagle took flight for over two hours this week, equipped with a new propulsion modular developed by the Naval Research Laboratory. The aircraft was powered by a single 1,500 watt hydrogen fuel cell provided by UTC Power. The aircraft was able to meet the expectations of Insitu and, in some cases, surpass what the company had been hoping for. Insitu believes that the successful flight is just the first step in showing off how viable and effective hydrogen fuel can be for this purpose.

The U.S. Department of Defense has taken a keen interest in hydrogen fuel recently.

The agency has identified alternative energy as a matter of national security and believes that breaking away from foreign sources of fuel is of paramount importance. As such, the agency has been investing heavily in alternative energy projects. Insitu claims that the ScanEagle is meeting the expectations of the Department of Defense and will continue to do so as it moves into further stages of development.

Insitu notes that fuel cell technology is currently developing at a rapid pace. New fuel cells are becoming more efficient and powerful and are being made with inexpensive materials. Changes to the way fuel cells are made are enabling the company to research hydrogen energy more effectively, without having to spend vast quantities of money to do so. This research will have a direct effect on the ScanEagle, but may also serve to benefit the hydrogen energy industry as a whole.