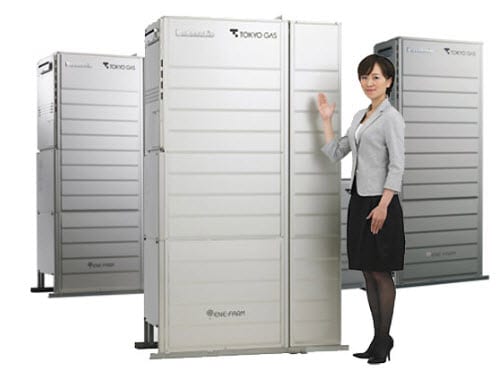 Japan’s expansive hydrogen energy system, ENE-FARM, has found supporters within the country’s natural gas industry. Several natural gas firms, such as Tokyo Gas, are now promoting energy generated by the ENE-FARM to households throughout Japan. The ENE-FARM was first introduced to the commercial market in 2009. The energy system incorporates a plethora of powerful hydrogen fuel cells that operate around the clock. The electricity generated by these fuel cells is used to power homes and businesses throughout Japan. The ENE-FARM is considered one of the world’s largest and most powerful hydrogen fuel cell systems currently in operation.

Natural gas and fuel cells have enjoyed a close relationship throughout the past several years. Fuel cells are considered clean energy systems in that the units themselves do not produce any harmful emissions. They do require a source of power, however, which is often electricity generated by burning fossil-fuels such as coal and oil. This electricity is necessary for fuel cells to operate, but makes the systems environmentally unfriendly by association. Natural gas is a suitable alternative because it can provide enough electricity to keep fuel cells operational without any significant emissions being introduced into the environment.

Japan’s four largest gas companies are banding together to promote the energy produced by the ENE-FARM. These companies are looking to sell auxiliary components to the ENE-FARM, such as storage devices, to make the use of hydrogen energy more appealing to homeowners. Tokyo Gas plans on selling more storage batteries for homes that receive energy from the ENE-FARM. These batteries could be used in the event of a power outage. The company plans to sell approximately 7,000 new units in the 2012 fiscal year. Osaka Gas has plans to launch a new kind of storage equipment for homeowners. These storage units would acquire energy from the ENE-FARM like those offered by Tokyo Gas, but would be able to meet 80% of a household’s needs in terms of electricity.

Companies to continue working to promote hydrogen and alternative energy

These companies believe that hydrogen fuel could be the future of Japanese energy. They are currently working on helping consumers adopt the fuel quickly so as to take advantage of the rapidly changing focus from fossil-fuels to alternative energy.