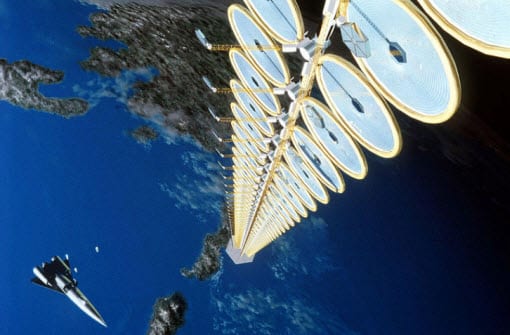 but Artemis Innovation Management Solutions, a leading alternative energy technology company based in California, believes that such an energy harvesting system is possible. A team of researchers led by John Mankins have developed the first practical solar energy powered satellite, aptly dubbed the Solar Power Satellite. The project is still in very early conceptual stages, but Mankins believes that a space-based solar power system is absolutely feasible.

As the world’s population grows and more countries enter a period of industrialization, the demand for energy is reaching new heights.

The demand may soon overwhelm the capabilities of conventional energy systems; a prospect that is leading many nations to seek out alternative to fossil-fuels and other archaic energies in the interest of sustainability. Space-based solar energy harvesting is, perhaps, one of the most ambitious concepts coming to the world of alternative energy and could be the key to satiating the world’s hunger for energy.

Collecting solar energy in space is an attractive concept because there are no mitigating factors to sunlight in such an environment. Mankins and his team have developed a concept system that is comprised of thin-film mirrors and a satellite dish that is equipped with photovoltaic solar panels. The mirrors act as concentrators for the sunlight, amplifying the light and directing it at the solar panels. These panels then convert the sunlight into electricity. It is currently unclear whether this electricity would be transmitted to earth or if it will be used for other space-based projects.

Researchers will begin developing a prototype of the system over the next year.

They believe that a low-orbit flight test could take place within the next few years, but researchers are uncertain when such a system will see operation. The project currently has the support of NASA as well as interest from various private investors. This support will prove crucial in determining whether such an ambitious concept ever leaves the ground.