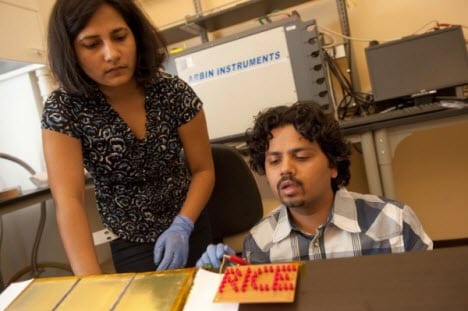 Researchers from the Rice University in Texas have developed a new kind of lithium-ion battery that can be affixed to nearly any surface. Lithium-ion batteries are a popular energy system throughout the world, being used to power various electronic devices as well as vehicles. The batteries themselves are nothing new, having been around for decades. Rice researchers claim that their version of the famous batteries is something the world has never seen before.

New approach could revolutionize the development of batteries

Rice University researchers have developed a lithium-ion battery that can be painted on virtually any surface. The battery, developed by scientist Pulickel Ajayan and his team, can be affixed to surfaces in spray-painted layers. Ajayan notes that the breakthrough in lithium-ion batteries could open up the way for new designs for the widely used energy system. The paint-on approach certainly adds more flexibility to the batteries, allowing them to be used more widely.

Painted batteries show that they can generate a constant charge

Researchers devoted a great deal of their time finding the right type of paints that could be used to facilitate energy production. The mixture consists of various types of paints, current collectors, cathodes and anodes, as well as a polymer separator. Researchers painted the mixture on a variety of surfaces to test the effectiveness of the approach. These tests found that the prototype forms of the paint-on lithium-ion batteries were able to produce a constant 2.4 volts for approximately 6 hours.

Lithium-ion batteries could be made more attractive for various industries

Lithium-ion batteries have been a popular alternative energy option for some time. This popularity is growing as more industries around the world seek out alternatives to fossil-fuels. While the paint-on lithium-ion batteries may not be able to power vehicles in their present form, researchers believe that the batteries could be made more powerful and more attractive for use from a wide audience.