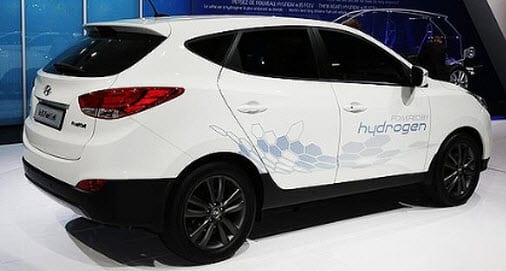 Tucson ix35 to be officially launched in 2013

The 2012 Paris Auto Show ended ten days ago and the buzz surrounding Hyundai is still strong. The automaker has made headlines with its aggressive promotion of the Tucson ix35 hydrogen-powered SUV. Hyundai has also generated hype for the vehicle by claiming that it will be ready for commercialization next year. At this year’s Paris Auto Show, Hyundai revealed that it was ready to begin mass production of the Tucson ix35 in December of 2012.

Production of new hydrogen-powered vehicle to begin in December 2012

In just over a month, Hyundai will begin building a large number of Tucson ix35 models, which will be sent to markets all over the world at some point in 2013. Though the automaker has not yet revealed an official launch date for the hydrogen-powered vehicle, but fans of the company have still gotten excited over the prospect of soon being able to drive a hydrogen-powered vehicle. Many consumers will have to wait for their chance to drive the vehicle, however. The length of this wait will be entirely dependent on how many people actually want to drive the Tucson ix35.

Hyundai’s commercialization plan for the vehicle is to offer it up on a lease in a limited market release. In 2013, the Tucson ix35 will be made available is South Korea, Europe, Scandinavia, and the U.S., where consumers will be able to lease it for a certain amount of time. In 2015, Hyundai is expected to broaden this plan, beginning production of some 10,000 units annually and entering the Tucson ix35 into new markets around the world.

Most of the world’s major automakers have plans to launch their own hydrogen-powered vehicle in 2015 and 2016. These years are considered ideal because automakers believe that many of the world’s most promising markets will have established a comprehensive hydrogen fuel infrastructure by that time. Hyundai believes that an adequate infrastructure already exists and is willing to take the risk of launching the Tucson ix35 in an attempt to establish an early lead in the global marketplace.