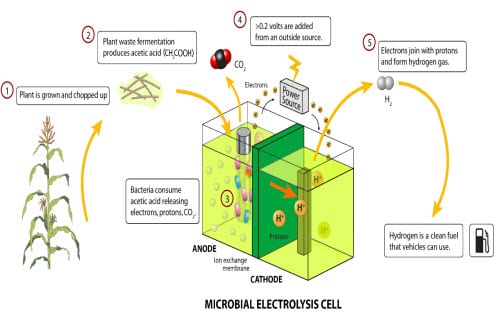 Turning waste into electricity is a concept that is gaining a great deal of attention. As the world’s population grows, the problems presented by waste are growing. An expanding population also means more stress put on the planet’s existing energy resources, fossil-fuels and otherwise. Converting organic waste into electricity is beginning to be considered a viable way to solve the energy and waste problems associated with a growing population. Microbial fuel cells may hold the key to this endeavor.

Microbial fuel cells are a variant of hydrogen fuel cells. These energy systems use bacteria to consume organic waste and produce methane or hydrogen gas. The gases produced by the bacteria are then used in the fuel cell to generate electricity. Microbial fuel cells are often hailed for their ability to address two issues at once – energy and waste – and do so efficiently. There may be a way to make the energy systems even more efficient than they currently are, however, which may also make them more attractive for commercial use.

Researchers from the Arizona State University’s Biodesign Institute suggest that certain kinds of bacteria are more proficient at converting waste into energy than others are. Researchers are currently working on applying these bacteria to modern day microbial fuel cells in the hopes of finding the perfect microorganism that can produce a large amount of usable hydrogen or methane through the consumption of organic waste.

Researchers from the Arizona State University have already seen a moderate amount of success in their endeavor and are beginning to shift their focus to scaling up microbial fuel cell technology. If microbial fuel cells can be scaled up to an industrial level, they may become a profoundly powerful energy generation system while also addressing the issues presented by municipal waste.