The first phase of the new Ouarzazate solar energy plant has been switched on.

Morocco’s massive solar power plant, which is scheduled to be fully operational by 2018, has successfully completed the first phase of its concentrated solar plant, located in the city of Ouarzazate. The nation recently announced that it has turned on Noor 1, the first of three sections of the facility, which, when combined, will make up the largest concentrated solar facility in the world.

The plant will use crescent-shaped mirrors, not solar panels, to generate electricity.

In addition to eventually being the world’s largest concentrated solar power plant, what makes this particular complex unique is that it does not use solar panels. Unlike conventional solar energy facilities that use solar panels to capture the sun’s light, the Ouarazate plant uses mirrors that are shaped like crescents.

These crescent-shaped mirrors concentrate sunlight on steel pipes located behind them. These pipes heat up the oil inside. When this oil reaches up to 740 degrees Fahrenheit, it is utilized to generate steam, which powers the turbines that produce electricity. In addition, the hot oil can be stored to produce energy overnight, as well. 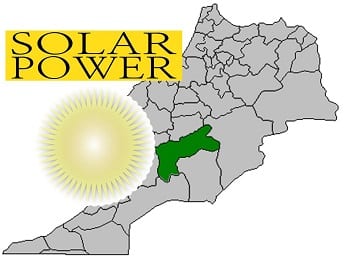 When fully operational, the solar power plant complex is expected to provide renewable electricity to as many as 1.1 million people.

Presently, Noor 1 produces 160 MW (megawatts) of energy. However, the complete complex, which spreads across 6,000 acres of desert, will be equipped with 500,000 of the specially-shaped mirrors. This will enable the plant to generate 580 MW of electricity, providing energy to a million homes.

Currently, Morocco is keeping the project domestic, so the energy that the solar power plant generates will be used to cover the country’s energy needs. However, that was not always the case. Initially, before its European partners withdrew from the project, the generated electricity was to be delivered to Europe. When the partners pulled out, the project nearly ended but was saved with the help of the Moroccan government and the African Development Bank. Presently, it is not yet known if new foreign partners will choose to get on board with the project.