Interest in solar energy is growing throughout the world and Morocco is in an ideal position to take advantage of the power of the sun. In the landlocked city of Ouarzazate, the Morocco government is supporting the development of one of the world’s largest consolidated renewable energy systems. The system will focus primarily on solar energy, with hydropower and wind power also supplementing the energy system. Morocco is expected to get more than half of its energy from this project by 2020.

Currently, Morocco receives the majority of its energy from fossil-fuels, with 94% of these fuels being imported from other countries. A reliance on conventional forms of energy has become an economic problem for the country, and it is now seeking other forms of energy in order to become more financially and environmentally sustainable. Because much of Morocco is dominated by desert land, solar energy could become a primary source of power for the country. 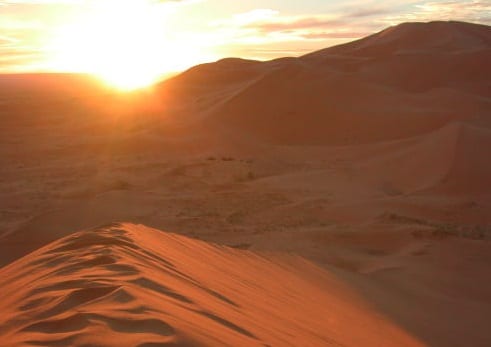 The new project will take form over four phases, referred to as Noor, which is “light” in Arabic. The Noor 1 phase involves the installation of some 500,000 mirrors arranged in 800 rows. These mirrors will track the sun as it travels the sky. The mirrors are affixed to a pipeline that is filled with a thermal oil, which will be heated to 393 degrees Celsius. The heat trapped by the thermal oil will be used to convert water into steam, which will then be fed through turbines to produce electrical power.

With solar energy combined with other forms of clean power, the completed power plant will generate some 580 megawatts of electricity, which is enough to power approximately 1 million average homes. The energy system is expected to receive some $9 billion in investments from various organizations, including the World Bank.