The Netherlands to become home to the first solar road

New bike path in the European nation acts as an electricity generator.

Bike paths are popular in Amsterdam and starting on November 12, a 70 meter (230 feet) stretch of the path that connects the capital city suburbs of Krommenie and Wormerverr, a path that is heavily used by both commuters and school children, with an estimated average of 2,000 cyclists riding its two lanes daily, will be embedded with solar panels, making it the first public solar road in the world.

The 70 meter stretch of road is comprised of crystalline silicon solar cells, installed in rows. The cells are encased inside concrete and have been covered with a layer of translucent tempered glass. To help keep the surface of the road clean, a slight tilt and non-adhesive finish has been applied in an effort to guarantee that the cells will receive maximum sunlight exposure.

Nevertheless, panels will generate about 30 percent less power than rooftop solar panels due to the fact that they cannot be adjusted on the road to the position of the sun. That being said, the creators of the road hope that in 2016, once the path is extended to 100 meters, that it will generate enough energy to power three homes. The project was primarily funded by the local authority and cost an estimated $2.4 million (€3 million). 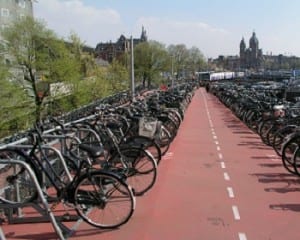 Many see potential in the development and use of solar roads.

The concept behind the solar bike path was developed by the Netherlands’ TNO research institute and the developers think their idea has a lot of potential and doesn’t end with the bicycle path. The Guardian was told by the institute’s Sten de Wit that as much as 20 percent of the nation’s 140,000km of road could possibly be adapted and this would help to power everything from electric cars to traffic lights.

Solar road ideas have also be explored in other parts of the world, like America, where two US engineers, Scott and Julie Brusaw, have been working hard since 2006 to develop solar panels that can be used on roads. Their company called Solar Roadways, received a contract from America’s Federal Highway Administration to build a prototype in 2009. Since then they have raised over $2 million via crowdfunding to put their design into production.