The Tunisian government has approved a project that aims to grow food in the Sahara.

Growing food in the desert isn’t easy, which is a problem for Tunisia, considering 75% of the country is covered in desert. However, a new cutting-edge agriculture project that is funded by the Norwegian Foreign Ministry, is working on building a $30 million facility, which will use solar power and desalination technology to grow food in the Sahara Desert.

The Sahara Forest Project aims to grow 10 hectares of food in the desert.

The Sahara Forest Project is the company behind the facility. The building that is being constructed in Tunisia is based on the company’s first projects in Qatar and Jordan. It will cover 10 hectares of land and is expected to achieve the same success the company has had with their Qatar pilot project, which has managed to produce vegetables at a rate that is comparable to European farms over three crops a year, reported CNN.

According to the company’s CEO Joakim Hauge, the efficiency of their projects have improved as the company has learned to adapt their model to specific conditions. 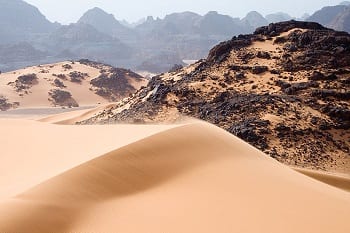 Sahara Forest Project seeks to bring together innovative technologies to regenerate the environment, provide fresh water and food as well as create jobs.

Concentrated solar power is key to the project.

The Sahara Forest Project is able to grow food in the desert by combining solar power with desalination technology.

More specifically, water from the sea is used to cool and provide humidity to the facility, while the salt that is extracted from the seawater is commercially sold. The water that has been desalinated is used for plant irrigation and for drinking.

Concentrated solar power uses mirrors to produce heat for a steam turbine and generate the energy needed to power the greenhouse by both purifying the seawater and pumping it through the facility. Combined, these technologies will help to ensure food can be grown all year long.

In addition, the project will work toward helping the nation achieve its renewable energy goal of generating 30% of its power from renewables by 2030. Last year, Tunisia generated only 1% of energy from renewable sources.

Hauge explained about the project that “We try to achieve a triple bottom line,” and added, “Something that makes financial sense, but also delivers social and environmental benefits.”

The combined solar power and desalination agricultural project is scheduled to open in Tunisia in 2018.