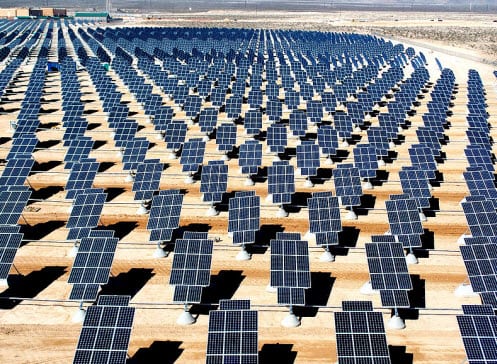 Solar energy continues to grow in popularity with US military

The U.S. military has held a keen interest in alternative energy for some time. The Department of Defense recently highlighted energy as a matter of national security and has been working to make the country as energy independent as possible. The military has begun showing more interest in solar energy recently, especially concentrated solar power (CSP) systems, which are capable of producing much more electrical power than traditional solar energy systems.

Semprius, a leading solar energy company, has won a contract that will have it build a high concentration photovoltaic solar energy system at the Edwards Air Force Base in California. The system developed by the company will be demonstrated at the base and help meet its energy needs. If the system can be proven to be cost effective through a series of tests, it is likely to be used at other military bases throughout the country before eventually seeing use in the private sector.

Concentrated solar power taken to the next level

Concentrated solar power systems make use of mirrors and other optical devices to amplify sunlight. This reduces the amount of sunlight that goes to waste while also helping produce higher levels of electrical power. Semprius has developed a system that uses this simple principle but makes drastic improvements to its practice. The company has managed to concentrate sunlight to the point that it can be harnessed by a solar cell that is roughly the size of a pinhead. The size of the solar cells make them cost effective, yet they are still capable of producing large amounts of electrical power.

Edwards Air Force Base is already home to three solar farms that are being tested by Borrego Solar Systems. These solar farms produce a combined 3 megawatts of electrical power, which only meats a fraction of the base’s 30 megawatt demand. The high concentration solar energy system from Semprius may help the base meet more of its energy demand through renewable sources, thus cutting costs associated with the use of fossil-fuels and traditional energy systems.