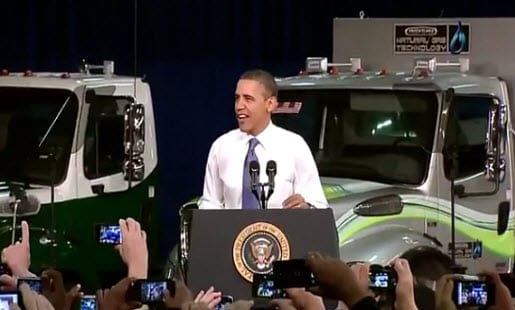 Continuing his push to promote alternative energy, President Obama hosted a speech at a Daimler manufacturing factory in North Carolina.

Over the past few weeks, Obama has been drawing attention to various forms of alternative energy and the government’s plans to pursue them. During his speech on Wednesday, the President focused on hydrogen and how it was being used by the global auto industry. Obama also introduced a new plan that would bring more than $1 billion in tax credits and federal grants to those purchasing hydrogen-powered vehicles.

The plan is part of the National Community Deployment Challenge, which aims to promote hydrogen fuel as a viable option for U.S. transportation.

The tax credits outlined in Obama’s plan would help 15 major cities across the U.S. establish a working hydrogen fuel infrastructure. It would also enable these cities to offer some kind of incentive to encourage residents to purchase hydrogen-powered vehicles.

The President is taking a hard stance on the issue of the country’s continued reliance on fossil-fuels.

He wants to move the country away from oil and help adopt alternative energy. The President has also petitioned Congress to expand a tax credit concerning vehicles powered by alternative energy. He is looking to increase this credit from $7,500 to $10,000. Obama has plans to continue his alternative energy tour for the next few weeks before switching gears and tackling other political issues.