Researchers aim to cut down the cost of hydrogen fuel cells

Laboratories team to find a replacement for platinum in fuel cells

Researchers from the Argonne National Laboratory and the Los Alamos National Laboratory have begun working together in order to develop less expensive fuel cells. The two organizations are working through the Electrocatalysis Consortium, which was formed by the Department of Energy. The initiative is meant to find alternatives to the platinum used to make fuel cell catalysts. These catalysts are required to ensure that fuel cells operate effectively, allowing electrolysis to take form within a fuel cell energy system.

Finding ways to make fuel cells less expensive has become a major priority for those interested in clean transportation. The auto industry has become heavily involved in the fuel cell sector, with several companies having already developed hydrogen fuel cells to power a new generation of clean vehicles. Automakers have found that fuel cells are quite capable of powering vehicles in an effective manner. The problem, however, is that these energy systems are quite expensive due to their use of platinum. This has an effect on the overall price of fuel cell vehicles, making them less attractive to consumers in general. 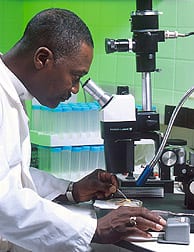 Approximately half of the total cost associated with automotive fuel cell systems comes from their use of platinum. Researchers from the Argonne National Laboratory and the Los Alamos National Laboratory will work together to find a replacement for platinum, in the near future. Research efforts in other parts of the world have made progress in finding alternatives to platinum, such as nickel and cobalt. These materials are both inexpensive and function in a similar way to platinum, if they are used correctly.

Finding alternatives to platinum has become a priority

Replacing platinum is expected to make hydrogen fuel cells more attractive to those interested in renewable energy. These energy systems are not only being used in the auto industry, of course, and they have been providing electrical power to various industries over the past several years. As they become less expensive, they may see more use in emerging sectors.