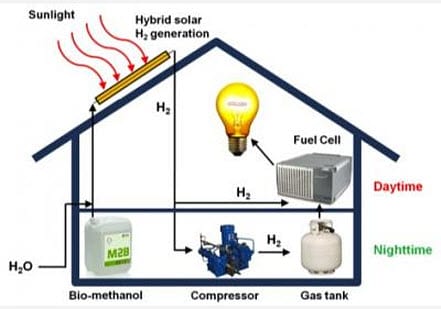 A team of researchers from Duke University have developed a hybrid hydrogen-solar power system that can be used to provide electricity for houses.

Such a system has been the subject of interest for those developing fuel cell technologies as it presents a unique and completely sustainable energy solution. Fuel cells are notorious for their expense, but have also generated negative stigmas for their use of fossil-fuels to produce electricity. Duke’s hybrid system may be the solution to these problems, as researcher’s present and affordable and efficient alternative to conventional hydrogen power systems.

The system is comprised of a fuel cell, hydrogen storage device and solar panels. The electricity generated by solar power is funneled into the fuel cell in order to power chemical conversions of water into hydrogen. The hydrogen is then pressurized and injected into the storage device to be used later. Thus far, researchers have had success with their system on a small scale, but are hopeful that the system can be used for much larger projects in the future.

The total installation cost of the system hovers just below $8,000, making it one of the most affordable alternative energy systems in the world.

While this is still more expensive than traditional power methods, researchers can tweak certain aspects of the system to make it less expensive.

Further testing must be conducted before the system can see real world use, but researchers remain hopeful that hydrogen power will soon be available in the commercial market.