Molecules that contain iron could capture energy from sunlight.

Swedish researchers from Lund University have discovered a new method for capturing energy from sunlight that involves the use of molecules that contain iron, and their discovery may lead to cheaper and more eco-friendly solar power applications.

The researchers have produced an iron-based dye capable of transforming sunlight into electrons.

Researchers from Lund University’s Chemistry Department collaborated with Uppsala University, and successfully produced an iron-based dye that can convert light into electrons with almost 100 percent efficiency.

According to a press release from Lund University, the researchers are working on solar cells that consist of a thin film of nanostructured titanium dioxide and a solar energy capturing dye. Currently, the best solar cells of this kind utilize dyes that contain a very rare and costly element called ruthenium metal. 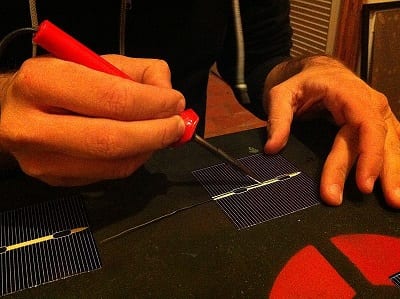 The iron-based dye that the researchers produced is a huge breakthrough because while they are not the first to attempt to replace ruthenium with iron, they are the first to do so with success. “All previous attempts have resulted in molecules that convert light energy into heat instead of electrons, which is required for solar cells to generate electricity,” said Vily Sundström, a Lund University professor of chemical physics.

Iron could be very promising for providing a cheaper and cleaner solar power future.

Scientists around the globe are always trying to find new and more efficient ways to capture and utilize the energy from sunlight. Although an inexhaustible renewable energy resource, currently, solar is only used to a limited extent, iron may help to change that.

As Lund University’s professor of organic chemistry Kenneth Wärnmark explains, “The advantage of using iron is that it is a common element in nature. It can provide inexpensive and environmentally friendly applications of solar energy in the future.”

In addition, the discovery the researchers have made may also advance solar fuels research. However, more studies are required before the new solar cell dye can be considered a viable product, but hopes are high.

Sundström noted that the recent study results suggest that the iron-based solar power cells can be, at the very least, as effective as the ruthenium or other rare metal-based solar cells that are presently used. The researchers results have been published in the latest issue of Nature Chemistry.