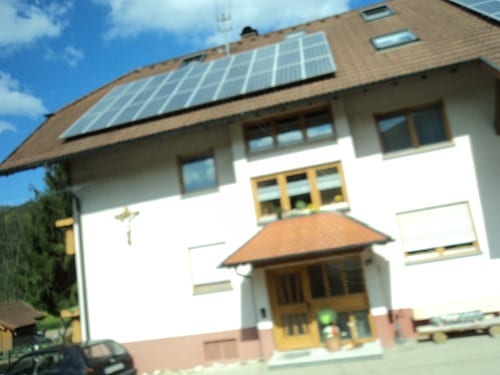 Germany continues to make progress in its adoption of solar energy

Germany has aptly established itself as a bastion for alternative energy. The country has embraced various forms of renewable power over the past several months. In the wake of the 2011 Fukushima disaster, Germany began abandoning nuclear power, which had made up a significant portion of the country’s energy production. In order to replace nuclear power, Germany turned to solar energy, which has become one of the most lucrative and powerful forms of alternative energy in the country.

Number of homes powered by solar energy jumps 45% since 2011

According to the German Solar Energy Association, the country’s various solar energy projects are being used to power some 8 million homes. This is a 45% increase from the number of homes that were powered through the use of solar energy in 2011. More than 1.3 million solar energy systems were installed throughout the country in 2012, largely backed by an ambitious feed-in tariff that proved so successful that the government had to make cuts to the benefits the plan offered homeowners.

Tax increase may put some pressure on energy consumption

While Germany has shown promising progress in its adoption of solar energy, the transition toward clean forms of power is an expensive endeavor. This month, German citizens will begin paying higher taxes on energy. This will take the tax from $4.76 per kilowatt-hour to $7.40 per kilowatt-hour. This is meant to help finance the country’s transition toward alternative energy. While the tax increase means that people will be paying more for their electricity, the German government does not expect the adoption of solar energy to slow in any significant manner.

As Germany embraces solar energy more fully, the cost of solar energy systems is dropping rapidly. This is due, in part, to the entry of Chinese solar panel manufacturers into the global market. These companies have introduced a veritable flood of new products that are much less expensive than those offered by European manufacturers. As such, the cost of solar energy systems that use these products is much lower, making them easily attainable for consumers.